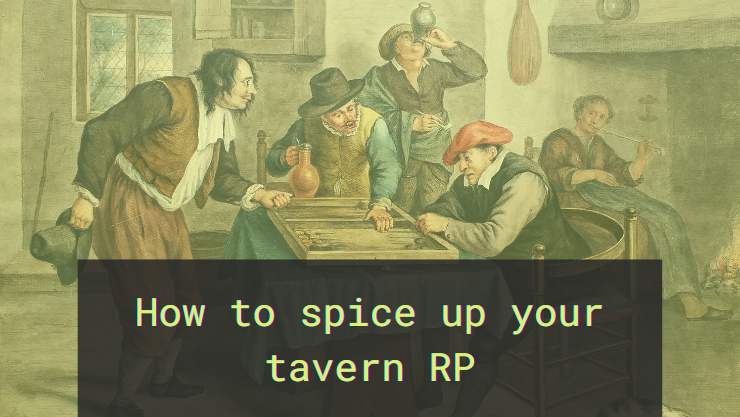 Day five hundred and sixty-seven. I enter the tavern and sit down at my favorite bar stool with my trusty journal in hand. When the barkeep comes by, I order my usual.

While I wait, I glance around the room and notice a bit of chatter among the locals. Another quiet night. “Same ol’, same ol’,” I say to myself. I flip open my journal and begin to add a few lines to pass the time…

Does the above seem familiar? If so, you’ve probably experienced a dull night of tavern roleplay.

But worry not, dear traveler! In this post, I not only define tavern RP but offer several tips on how to keep it from becoming stale, including 10 fun ideas borrowed straight from my personal bag of tricks.

What is tavern RP?

Tavern roleplay (RP) is a type of social roleplay that often takes place in bars or pubs. Tavern RP is fairly common in text-based games such as chatroom RPGs and multi-user dungeons (MUDs), though it can also occur in MMORPGs and tabletop games, as well.

While tavern RP can be a great way to meet new people and make friends, it has a reputation for becoming dull and repetitive after a while.

Why does tavern RP become dull?

Tavern RP can become dull for a few different reasons, even among players who really enjoy social roleplay.

For one thing, if there’s not much going on in the game that week, the characters may have less to talk about. Another reason might be a lack of fresh faces or new folks to meet. . At other times, players may just not know how to engage.

When these things happen, players can end up slipping into passive roles while waiting for someone new to come along or for something exciting to happen

Fortunately, there are a few tricks you can keep up your sleeve for such occasions. These tricks work just as well for game masters as they do for players.

How to prevent tavern RP from becoming dull

The key to preventing tavern RP from becoming dull is to simply take a more active role and create some excitement.

Passively jotting notes down in a journal isn’t the most engaging roleplay hook, though it can certainly fit the mood.

If you want the tavern to be more entertaining – help make some entertainment! Someone has to take that first step to generate the fun, after all.

Games within games: 10 ways to spice up your tavern RP

Below are ten ideas to spice up your tavern roleplay, taken from my personal bag of tricks.

Depending on the game you’re playing, they might not all work out neatly (not all games have a built-in system for playing Poker, for example), but hopefully this list will give you one or two things to try – as well as some inspiration to come up with your own ideas!

Dice games are great for beginners, as they’re usually fairly easy to play and require few players. Also, most roleplaying systems have some sort of built-in dice roller.

To really spice things up and generate interest, take bets on the rolls. This will increase the investment of those who play. Onlookers can participate by cheering on their favorites.

One of the downsides of playing dice, depending on the game, is that not everyone enjoys doing math or keeping score. My suggestion is to start with a simple “highest roll wins” game first and go from there.

Hangman is one of my favorite games to play within roleplaying games. It’s a word puzzle that only requires 2 people to play, though you can also play it in groups. Because the rules are very simple and the actions are easy to describe, Hangman is an easy game to play using emotes.

To start, one person draws a scaffold on a piece of paper. They also choose a word or phrase for the round and present the number of letters in it, often denoted by underscores. For example: _ _ _ _ _ or five underscores for a 5-letter word.

Accessibility tip: spell out the underscores to make sure they can be heard by screen readers. For example: instead of _ _ A _ E, it would be: space space A space E, or blank blank A blank E.

The game ends in one of two ways:

The host determines the number of body parts. A more challenging game only includes the head, body, arms, and legs, but an easier game could include hands and feet, as well.

Bonus tip: use words that are specific to your game’s setting. This will make the experience even more immersive for your fellow players.

Trivia is a fun game to play in groups. Although it does require having topic(s) and a pool of questions to draw from, it can easily support fun roleplay for hours.

Social games include things like Two Truths and a Lie, Spin the Bottle, Truth or Dare, and other such shenanigans. You’ll sometimes hear these referred to as campfire games.

Social games are generally low-lift, easy to join, and come in a variety of flavors. They can also be a bit more involved.

For example, take the party game Mafia. Mafia is a great social game, but it requires a minimum number of players and a bit more commitment than a game like Truth or Dare. Something to keep in mind as you pick and choose!

If your roleplaying game supports a card system, card games are another fun option!

Blackjack and Poker are great because they support betting and many people already know the basic rules. If you’re the one hosting the game, you can spice things up with your own “house rules,” as well.

On the other hand, managing a bunch of cards can be a bit tricky, especially if the tavern is busy or if players aren’t paying close attention. I would consider it a more advanced type of entertainment in most writing game contexts.

Many people enjoy having their fortunes told, and the same is true in roleplay.

Whether your character is a serious oracle or just a con artist trying to make some quick coin, there’s some fun to be had in telling other characters’ fortunes.

Set yourself up in a booth and invite others over for a tarot spread, palm reading, or to scry their future in a crystal ball. If you don’t have a physical tarot card deck, there are online decks available.

The wonderful part about fortune telling is that you can often just wing it, and it’ll end up being a hoot no matter what. 😂

For those less interested in fate or luck, there’s always a good old-fashioned arm wrestling competition!

Arm wrestling is a great way to involve tougher characters, though it can also appeal to other types, as well. And best of all, the rest of the tavern can get involved by betting on (or cheering for) their favored opponent!

Not all tavern RP takes place in taverns and bars, but the scenes that do are often ripe for casual drinking games.

Drinking games can include anything from beer pong to straight-up drinking contests, where the first one to tap out (or pass out) loses the bet.

Most of the ideas above can also be given a drinking component! As in, if you guess a wrong answer or lose a hand, you take or finish your drink. This is one way to add “risk” without requiring other characters to invest their hard-earned coin.

If it makes sense for the setting and your character, you can put on a performance of some kind, such as:

Performances can be great fun, as they can shake things up and give players more to go off of than the usual chit-chat. The more engaging, the better. However, they often take a bit of prepwork to set up in advance.

When you’re ready to kick things up a notch, it’s time to take the tavern with you to the local tourney grounds or other sporting locations.

Jousting, racing, bull riding, bullfighting, gladiator sports, friendly duels, and other events can be an awesome way to bring crowds together and keep things exciting, no matter the theme of your roleplaying game.

I hope you enjoyed this week’s post on tavern RP! May it inspire you to come up with your own games within games. 🙂