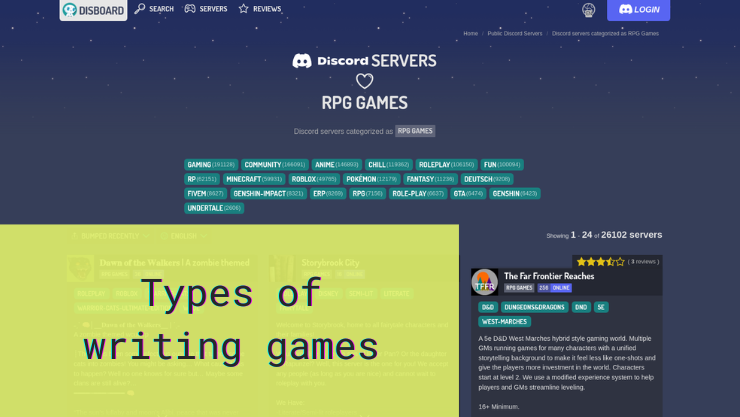 Hello, and welcome to Writing Games! As this is a site about writing games, I thought I’d kick things off by defining a few different types of writing games you can play online for free.

The list below is by no means exhaustive, but it does serve as a general overview and starting point for beginners.

If you’re thinking about getting into writing games, online roleplaying, or text-based gaming, this is a good place to start.

What are writing games?

Writing games are games that are played primarily by reading and writing. They can take many forms, but two of the most popular are roleplaying games and collaborative writing games.

The two types are not mutually exclusive. That is to say, games can include a mix of roleplay and collaborative storytelling.

I’ve included examples of each of these types below, along with some basic characteristics. I also note whether a type of game includes pay-to-play or pay-to-win options.

Online writing games you can play for free

Here are 4 types of writing games that you can play online for free:

Although the heyday of AOL Chat has long since passed, you can still find these games on platforms and services that support group text chat, such as Internet Relay Chat (IRC) or (more recently) the popular Discord platform.

When you play, you typically assume the role of a single character (known as a player character, or PC). You write out the actions and dialogue of your own PC, but you don’t control the thoughts or actions of others.

Gameplay occurs with players taking loose turns responding to each other in character. A scene can last several real-life (RL) hours in one sitting or can be carried out over several days or weeks, depending on the game.

Larger games may have several text channels where the action can occur, though there’s often a central hub (such as a hangout, tavern, school, or city) where characters start out or spend most of their time.

What are freeform writing games?

Some chatroom-based games call themselves “freeform” or “semi-freeform” writing games because they don’t require strict turn-taking or reliance on dice rolls or statistics to play.

Even so, many chatroom games have bots or built-in dice functions that can help players decide what happens during a roleplay scene. These games also typically have rules about what you can or cannot do in the course of gameplay.

Joining this type of writing game can be as simple as changing your online handle and writing your character’s entrance into the current scene.

Some games may require you to submit a character sheet for approval before you can enter play. Games that don’t require approval are sometimes referred to as “appless“.

If you’re interested in giving this type of writing game a shot, you might try BlkDragon Inn.

BDI is one of the longest-running online writing games out there. It now takes place on Discord, but prior to that, it was played over IRC. For a while, it also had an active forums component. (See forum-based writing games below.)

Tip: These and other terms are defined in the glossary.

Forum writing games, also referred to as “play-by-post” games, are a type of writing game that takes place on forums – or online “bulletin boards” as they were known back in the day.

The main difference is that instead of playing in real-time, you visit the forum to continue any ongoing scenes.

For this reason, forum games can feel slower-paced and encourage longer forms of writing than the quicker back-and-forth styles often seen in chat-based play.

Typically, the forums themselves are structured in a way that organizes gameplay. For example, each folder might be a geographical location with sub-folders underneath for major cities, wilderness, and other landmarks where storylines might take place.

Forum games are popular for historical and period-focused games and usually require some sort of character sheet and application to play.

You can find many examples of this type of writing game on TopRpSites.com and peppered across the internet. Top Rp Sites has a lot to choose from. You can even browse by category.

Multi-user games, including MUDs, MUSHes, and other MU* variants, are similar to chatroom-based games in that gameplay occurs in real time.

They differ in that each game is structured by a codebase (underlying program) that determines the kinds of things you can do there on behalf of your character.

With these games, multiple players log in and play at the same time, similar to an MMORPG.

To log in, players often use a program called a MUD client that must be downloaded and installed on their computer (Mudlet and MUSHClient are popular, free examples).

Browser-based clients do exist and are great for trying things out, but they tend to be less configurable and therefore less popular for regular play. You can play on your smartphone, too! Check out my MUD Resources page for links to various clients and guides.

These types of writing games vary greatly depending on the codebase used to create them, the game’s setting/theme, rules, and how much and what kind of writing is expected of players.

Some games require very little roleplaying and are more like chat rooms or social hangouts. Others are very heavily roleplay-focused and require you to be in character at all times. For an overview, see my post on the 5 Basic MUD Styles.

Most MU* games can be played for free, though you’ll occasionally find one that requires a subscription (“pay-to-play”). Others might advertise themselves as free, but they provide in-game advantages if you pay, subscribe, or donate (“pay-to-win” or “pay-for-perks”).

In my experience, subscription games can be quite fun to play, but they typically maintain an MMORPG feel. For example, they focus more on mechanics and/or socializing, or they place less emphasis on player-driven storytelling and writing.

While MU* games are played primarily through writing and text, they’re not all equally accessible to non-sighted players. If a game has screen reader-friendly features, they’ll usually advertise this on their website or early in the game’s tutorial.

Instead of moderators, the MU* type of writing game usually has admin users known as “wizards,” “immortals,” or “imms” for short.

Imms use elevated privileges to make changes to help files, characters, aspects of the game world, codebase, or to uphold the game’s rules and standards.

Imms are almost always volunteers unless it’s a pay-to-play game.

You’ll find hundreds of games registered on sites like The Mud Connector and Top MUD Sites. TMC and TMS are long-running text-based game directories and voting hubs. For a list of others, see my MUD Resources page.

Listings can be filtered by category. You’ll find that many games are inspired by popular TV shows, movies, and works of fiction. Others are set in elaborate original worlds.

Other outlets for writing and roleplaying online include social media and blogging websites, which are host to all sorts of games.

The style and speed of roleplay with these types of writing games depend on the platform used.

For example, Twitter roleplay can be fast and snappy, similar to a chatroom, whereas a scene on Tumblr might take days, similar to a forum game.

Unlike forum and chatroom games, however, social media roleplay is often written in the first person point of view (“I”) rather than the second person (“you”) or third person (“she, he, they, it”).

Another difference to note is that these types of games often include more use of images and graphics. As such, they may not be as accessible to gamers with partial/no sight unless other players include alt text with their images.

If you’re interested in giving Tumblr RP a try, check out this how-to guide. If you prefer Twitter, you might find some useful advice in this guide.

Though the Twitter guide is aimed at WoW RP, the basics are applicable to other games and fandoms as well. Plus, it’s a very approachable read, even for first-timers to this type of writing game.

Other types of writing games?

You may come across other types of writing games that don’t fit into the 4 groups above. These games may be unique, contextual, or just difficult to find.

For example, some games are played over email or in private threads or channels. These games may be limited to friends or roleplaying groups with good writing chemistry and be invite-only.

Often, they’re fully freeform and don’t need dice rolls or formal moderators. They may be spin-offs or one-offs that allow players to extend a storyline “offscreen” when a game becomes unavailable, switches timelines, or undergoes a reset.

Or they can simply be a way to explore a different theme with familiar characters in a fun/safe way that’s not supported by the original game.

If you spend some time searching for different types of writing games, you’re likely to come across other browser-based games, too. These games may have a specific purpose, terms of service, or custom structure and style of gameplay.

You’ll also come across interactive writing tools, such as Inklewriter and Twine, which can be used to write your own “choose your own adventure” games!

Typical features of other types of writing games

Examples of other types of writing games

Storium is a collaborative writing game platform that works through your browser. Like the other types of writing games listed above, you play from the perspective of a particular character. (In other words, there’s a roleplaying element.)

However, the focus is more on writing a story together in a structured way and less on playing your character in a sandbox environment.

Storium stories are guided by narrators, but the players decide and describe the outcomes through their writing choices.

And there you have it. Four types of writing games you can play online for free, plus examples.

If you’re interested in learning how to roleplay with text, check out my Beginner’s Guide to RP next!