Accessibility in TTRPGs with Wyrmworks Publishing 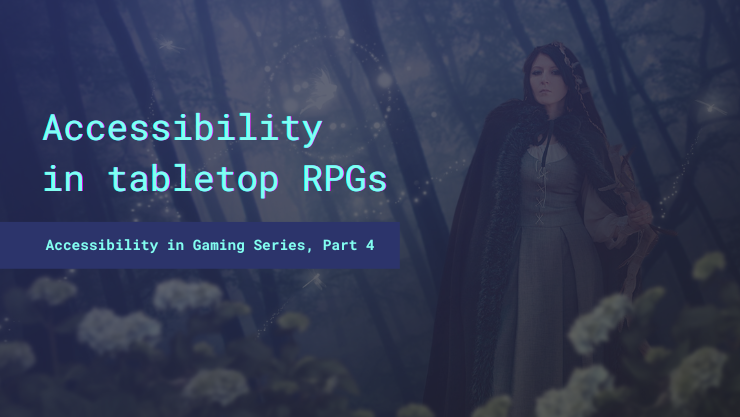 How Wyrmworks Publishing is making lives better through tabletop gaming

Last week, TBQ graciously offered her insight into what it’s like to be a writer and gamer living with chronic illness. In addition to her perspectives on accessibility, she also offered valuable advice for both game creators and gamers, including fellow TTRPG players.

This week, we’re going to dive into the topic of accessibility in TTRPGs more fully and meet someone actively working to make the tabletop gaming space more inclusive: Dale of Wyrmworks Publishing.

I learned about Wyrmworks Publishing from Lyndicat of HT Crochet and Geekery. When I started working on this series, it’d been a few years since I participated in a TTRPG session. Tabletop gaming just wasn’t at top of mind. (Though, the more I write about it, the more I do miss it.)

Long story short, I was looking for ways to collaborate with other writers and roleplayers, and Lyndicat suggested I check out Wyrmworks Publishing. I’m glad I did (thank you for the tip, Lyndicat!), and I’m excited to share Dale’s story and some of the amazing work he’s doing in the TTRPG space.

To get things started, I asked Dale to tell readers a little bit about himself and his interest in the topic of accessibility in TTRPGs.

“I started playing Advanced Dungeons & Dragons in 1982 and played all kinds of roleplaying games until I graduated college in 1994. Then I got married and moved around a lot, and grad school, work, and parenting kept me from finding a gaming group again until 2019.”

The year 2019 marked a turning point for Dale, when he started a D&D 5e group at his church to help at-risk teens build multi-generational mentoring relationships.

“I saw how effective the game was at improving lives through those relationships and realized that we were just scratching the surface of the potential,” he said.

The beginning of Limitless Heroics

Not only did Dale recognize the potential for tabletop gaming to improve lives, but he saw the need for more representation and inclusivity in TTRPGs.

“Between my own family and a lifelong variety of career and volunteer experiences with disabled, neurodiverse, and mentally ill people, I noticed the lack of representation in games and wanted to improve that,” said Dale.

“When I started talking to people about their experiences, it became clear how important it was to them that we fill this gap. And since I have kids with rare disabilities, I wanted to make sure to provide representation not only to the more well-known experiences, but the rare ones that people have never heard of but drastically impact the lives of those affected by them. Since D&D 5e has 50 million fans worldwide and is growing quickly, that seemed like a good place to start.”

Thus, the project that would eventually become Limitless Heroics – Including Characters with Disabilities, Mental Illness, and Neurodivergence in Fifth Edition was born.

One of the things I admire about Dale’s approach is that he brought diverse people into the fold early on to shape the direction of the project – even if he wasn’t sure how he’d finance it at first.

“I didn’t expect to make any money on it, so I put out a request for any artists who were disabled, mentally ill, or neurodivergent willing to contribute to the project with the promise that, if it did make money, I’d pay them,” he said.

“Several jumped in because they believed in the project. I wanted to pay them regardless, but I was working at a group home making slightly less than my monthly mortgage payment, slowly depleting our savings.”

But Dale was determined to make it work.

“As I worked on the project, I still didn’t have enough time for it, and the more I talked to people, the more urgent it felt, so in July 2021, I quit my day job to focus on this and related projects full time,” he said.

“I knew the only way I could afford it was via Kickstarter, so I sought out more artists, writers, editors, and sensitivity readers to help on the contingency that it would fund, but even when I set the campaign goal, I was determined to at least make sure they got compensated, even if I took a loss.”

Dale launched the Kickstarter on January 4, 2022, and it funded in 19 hours and kept a good pace throughout the campaign.

“I was shocked,” he said. “The daily hate mail I’d been getting [from naysayers of the project] continued but gradually dwindled, replaced by passionate comments of appreciation and excitement. People told me their stories and how meaningful this project was to them.

And to make sure our representation is as accurate as possible, we decided to send the core manuscript to our 2000+ backers to get their feedback. The writing is done, but we have 80 pages of feedback to work through, and we deeply appreciate every word of it.”

What is a sensitivity reader?

As a quick aside, I wanted to explain the role of a sensitivity reader, since not everyone who reads this post will necessarily be familiar with the term.

A sensitivity reader is someone who reads content for stereotypes, misrepresentation, or lack of understanding, and reports problematic content back to the author along with suggestions.

Thus, sensitivity readers can be an important part of the editing process and can help ensure that a written work is representative and inclusive before it’s published. For more info on the topic, I like this blog post.

Accessibility in TTRPGs: what are the most common issues?

Personally, I think Dale’s story is pretty inspiring, but for those less familiar with the idea of accessibility (let alone accessibility in TTRPGs), the importance of his work might not be immediately obvious.

To help readers understand the bigger picture, I asked Dale about the most common accessibility issues in tabletop gaming and how Wyrmworks Publishing is working to address them.

“Based on what I’ve been told, I can boil it down to 3 areas,” Dale answered. “Representation, accessible groups, and accessible game content.”

“Even though ~20% of the real world population is disabled, disability is nearly nonexistent in fantasy gaming besides the occasional pirate or blind martial artist, and mental illness appears in the form of ‘madness’ mechanics that make the stigma worse and actively keep people from getting help when they need it,” said Dale.

“I don’t think this is deliberate. Either people aren’t thinking about it (so many people have told me they never thought about it until they saw my work), or they don’t know how to do so respectfully,” he explained.

“Limitless Heroics is designed with lots of guidance to help with both, and where Limitless Heroics focuses on the characters (PC & NPC), our next project will focus on the rest of the world — adjusting campaign settings, adventures, and monsters in a way that doesn’t feel forced.”

“TTRPGs are a great equalizer when it comes to accessibility in groups. People of all ages and abilities can come to a table and play together as long as they can get to it,” Dale said.

I’ve also been talking to Virtual Tabletop (VTT) developers about making their online gaming environments more accessible, like adding more keyboard controls instead of mouse clicking, but that’s going to take some time.”

“Besides physical books, most TTRPGs are distributed by PDF, which has its pros and cons,” said Dale. “We’re working with Accessible Games, who have developed a layered PDF that the reader can adjust for visibility needs, to develop accessibility filtering for online TTRPG marketplaces.

And Limitless Heroics will have a dyslexia-friendly format in its PDF, but we’re also making it available in audio, .mobi, and plain text with CSV tables to meet different needs, since PDF doesn’t work well for many screen readers.

We’re also developing a modified version of the D&D 5e formatting guidelines that will make them more visually accessible, like replacing italics, which can be hard to read, with capitalization, and we’ll make those available when finished this summer.”

This is all great stuff to know, especially if you’re a creator who works in the TTRPG space!

Looking to the future of accessibility in TTRPGs

All of the above sounds like a pretty amazing start that will help a lot of folks and encourage understanding in the broader community.

When I asked Dale which Wyrmworks Publishing project he’s most excited about right now and why, his thoughts were already on the future.

“While I’m eager to finish Limitless Heroics and get it into everyone’s hands, I’m also looking forward to future projects,” he said.

“We’re hoping to produce a line of disability-themed miniatures (including service animals) this Fall while we develop a fantasy city that explores accessibility, what it could look like in a fantasy world, and how those concepts could improve the real world. We’ll have previews of that on our Patreon this year and hope to have it available next Spring.”

Dale’s advice for the TTRPG community

One of the reasons I started this series on accessibility is to learn from people who know more than I do, so of course I had to ask Dale for his top piece of advice to the TTRPG community.

“Talk to people,” he said. “Ask questions. You don’t know what you don’t know, so get to know people whose experiences are different from yours, whether in ability, culture, age, socioeconomic level, and more. Play some games with them. Be a friend to them. Have fun together.“

And even if you don’t work in the TTRPG space: “Talk to publishers, and ask gently for more representation and accessibility — be encouraging, not condemning,” said Dale.

“Spread the word about those who do. Talk to your FLGS about it. Subscribe to our weekly email for more news and suggestions.”

(FLGS stands for “friendly local game store” in tabletop lingo. You can find a locator here.)

I really liked Dale’s advice about being encouraging, in part because I think it’s applicable to a variety of situations. In general, people can be pretty resistant to criticism, especially if they’re unfamiliar with an issue. They might need time to process or do a little research, so it helps to start by being a guide instead of a critic.

Finally, I asked Dale what other resources he’d recommend should readers want to further pursue the topic of accessibility in TTRPGs.

“Check out Accessible Gaming Quarterly. It’s an amazing and fun resource that reports on and pushes accessibility in the tabletop space,” said Dale.

“For mental health, I love Jasper’s Game Day which, among many other things, provides safe online spaces for gaming. And check out our show, Gaining Advantage, where I talk to other people in the space who are making people’s lives better, and go look at the work they’re doing.”

I gotta say, I really love the name of that podcast.

A huge warm thank you Dale for taking the time to tell me about his work to support accessibility in TTRPGs!

I highly recommend stopping by the Wyrmworks Publishing website, but you can also find him on Twitter, where he regularly posts accessible adventures, including super-affordable maps and free NPCs. They’re a great way to support Wyrmworks Publishing, encourage diversity and accessibility in TTRPGs, and have fun. To preorder Limitless Heroics, visit inclusiverpg.com.