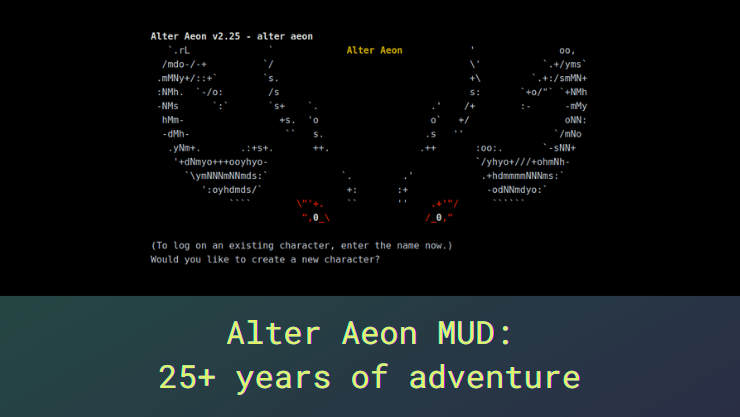 Today’s post is a feature on Alter Aeon, a long-running text-based game supported by a friendly, diverse community of sighted and non-sighted players from all over the world.

When I started blogging earlier this year, my first article on the topic of accessibility was an interview with Aaron, a gamer with partial sight. I really appreciated the opportunity to learn more about Aaron and his experiences, especially his take on playing text-based games.

Toward the end of the interview, Aaron recommended Alter Aeon as a fun game to try, and I’ve wanted to do a feature on it ever since.

Today, I finally present to you an interview with Shadowfax, one of Alter Aeon’s senior staff members!

When I asked Shadowfax to tell me a little bit about himself, I learned that he wears a lot of hats! But like many longtime staffers, he got his start as a builder.

(A builder is someone who creates the areas and writes the rooms, objects, and NPCs that make up a text-based MMO game.)

“I was first directed to Alter Aeon by a friend from high school,” said Shadowfax, recounting how he got started playing Alter Aeon. “Me, my brother, and other friends would play together in the school’s computer lab. We started playing in the fall of ’96.

The game was young and in need of new areas, so [we] all started building the following year. Over the next few years, we built so many new areas that [the Alter Aeon staff] grew weary of maintaining them all, and we were given a god character named ‘Draak’ that we three shared.

After a while, Dentin (the game’s owner) got tired of not knowing which of us he was talking with at any given moment, so we were split up. My brother retained Draak, I became Shadowfax, and the aforementioned friend became Void. Draak and I built the many areas that would become the Naginag Combine over the next several years.”

From there, Shadowfax’s role evolved.

“Around 2010, I wrote a bunch of articles for the website, and Dentin gave me access to the online database so I could add and edit articles myself. I was entrusted with maintaining the entire website soon thereafter,” he said.

“It was at that time I noticed a distinct lack of online presence from Alter Aeon, so with Dentin’s permission, I took over the Alter Aeon Twitter account, established our Facebook page, and created a YouTube channel for the game, all of which I still run today (with the help of some automation).”

Then, in 2015, Shadowfax took on yet another role for Alter Aeon: that of coder. And to top it all off, in 2022, he scored the background music for the game’s MUD client!

Needless to say, Shadowfax is an expert on Alter Aeon and what it’s all about, which makes him the perfect person to pester for an interview. 😉 So let’s get to it!

What is Alter Aeon?

For those new to the hobby, Alter Aeon is a type of text-based adventure game known as a multi-user dungeon (MUD). The game features accessibility support for non-sighted players and is appropriate for ages 10 and up.

“Alter Aeon could be described as PvE hack-and-slash with a medieval fantasy setting,” said Shadowfax.

Our game is enormous, so those who like to explore will never run out of places to discover. We have several hundred areas to visit, thousands of quests to perform, and tens of thousands of enemies to defeat. There is also an elaborate crafting system.

We have tried to make sure that there is something for everyone.”

Shadowfax added, “Our game is what is called a ‘multiclass’ MUD, meaning players start out by choosing a primary class and then level up other classes of their choosing as they progress through the game. The six classes are:

(For a quick overview of features and how to get started playing, check out Alter Aeon’s home page.)

What’s the story behind Alter Aeon?

Next, I asked Shadowfax to tell us a little bit about how the game got started. Every game has an origin story, after all, and I was curious about the details behind Alter Aeon.

“Dentin, the game’s creator, was in Alaska on student exchange in the early ’90s and played a MUD with his friends from college,” said Shadowfax.

“After playing for about a year, the game had some major balancing issues, and rather than fix them, the game’s creators decided to take it down.

Dentin, being the computer engineering student that he was, figured that he could create such a game himself, and so he sat down and coded what would later become Alter Aeon.

The game went live on January 15th, 1995, which we affectionately refer to as Alter Aeon’s ‘anniversary,’ and we have annual game events celebrating the start of the game.”

By my count, that makes Alter Aeon a whopping 27 years old as of the time of this post!

Given that most games are run on a completely volunteer basis, every year in operation and with an active player base is a feat worthy of being celebrated.

(I took a page from Alter Aeon’s book and added “celebrate the game’s anniversary” as a tip in my how-to guide on marketing text-based games. Thank you, Shadowfax!)

And if you regularly play a game run by someone else, be it a MUD or a tabletop campaign, don’t forget to say thank you and show appreciation from time to time. Running a game for others’ enjoyment is expensive – not just in terms of hosting and server fees (in the case of many MUDs) but also in time and energy.

Successful games are those that persevere through life’s hurdles. Often, they’re able to survive because they’re supported by an active community of staff and players who appreciate the value that each brings to the figurative or literal table.

What’s different about Alter Aeon compared to most MUDs?

The importance of an active, supportive community was further underscored when I asked Shadowfax about what makes Alter Aeon unique.

“One of the things that makes Alter Aeon stand out in the genre is that we have a dedicated team of staff members that actively develop the game,” he said.

“There are four senior staff members: the aforementioned Dentin, my brother Draak, Morpheus, and myself (Shadowfax), and we are supported by a half dozen part-time builders and coders.”

In terms of recent accomplishments that set the game apart, Shadowfax added, “Our game has an immersive soundtrack, complete with ambient sounds and music. This, in addition to the well-crafted sound effects, was largely spearheaded by Draak.”

Why are sound effects important in a text game?

Soundpacks are an important accessibility feature in multi-user dungeon games because they provide audio cues to screen reader users. These sound cues can help alert non-sighted players to important events, such as when their character takes damage or defeats an enemy.

Soundpacks are also great for providing ambiance in general and for making the gameplay experience more immersive.

Accessibility and support for non-sighted players

When it comes to accessibility, Alter Aeon’s support is fairly extensive compared to most MU* games. It not only includes but goes beyond a comprehensive soundpack.

“A major point of interest is our support for visually impaired players,” said Shadowfax. “This was accomplished in large part by the efforts of Morpheus, who is blind.

Morpheus has worked with Dentin over the years to ensure that proper filters and abbreviated commands were added server-side, not only for visually impaired players but also for builders, too.

We provide a client specially designed for the visually impaired called Mush-Z, which is the MUSHClient soundpack for Alter Aeon that makes it easier to play using a screen reader.”

When I asked Shadowfax what accessibility features the team likes most, he answered, “Morpheus’ favorite features as a player are the ‘map’ and ‘nearby’ commands.

With the game’s blind mode enabled, the map command can show which exits in a room have yet to be explored.”

In Alter Aeon, the ‘nearby’ command serves a different function than in LOTJ, though in both cases the command is designed to make the game more accessible.

Shadowfax explained its use in Alter Aeon: “The nearby command helps players to navigate the world by showing the direction that nearby areas are in with regards to your current position in the game world, which is extremely useful for those who cannot see visual maps.”

Both of these commands – ‘map’ and ‘nearby’ – are great examples for other MUD developers looking to expand their own games’ support for screen reader users.

Always on the lookout for good advice, I asked Shadowfax if there were any lessons the Alter Aeon staff learned the hard way, or things they wish they’d known when they started.

“We used to have an opt-in system for player killing called PPK, or ‘permanent player killer,'” he said.

“It was a mistake. We thought there was a desire for it, but it just ended up being too much of a hassle to try and balance the game to handle both PvE and PvP at once.

Also, the drama that arose from that situation was a major headache, and we wasted far too much effort trying to rectify it. Don’t let your players kill each other; it’s not worth it.”

A good reminder that PvP systems come with their own pros and cons, especially when death is permanent.

By shifting player versus player gameplay to arenas and temporary situations only, staff made the game more manageable for themselves while still allowing players to test their skills against one another.

“I personally would tell my younger self to trust his instincts and do what he felt was right,” said Shadowfax.

He added, “Something I know Dentin would say is that we should have given players the tools to solve problems themselves (rather than trying to do everything ourselves) much sooner, such as giving players the ability to set up clan areas themselves and use the ignore command to deal with harassment.”

Another great tip for those developing their own games. Given that staff members are usually volunteers with limited time and energy, it makes sense to focus on tools that can help players help themselves.

Advice for players thinking of giving Alter Aeon a try

Finally, I asked Shadowfax if he had any encouraging words for people who might be thinking of logging into Alter Aeon for the first time.

“Everyone is welcome on Alter Aeon! Creating a character is quick and easy,” he said.

“After you enter the game, don’t be afraid to make use of the ‘newbie’ channel if you have any questions.

We have a fun, friendly, and easygoing community ready to assist and encourage you. We have players from all over the world, so no matter what time zone you’re from, you’ll find other players to chat with. Many refer to our game as a ‘casual’ or ‘newbie-friendly’ experience.”

Shadowfax also noted that Alter Aeon is not play-to-win.

“You can earn credits by donating to the game, but credits can only be spent on superficial things like changing the color of your fireballs,” he said.

A very warm thank you to Shadowfax and the Alter Aeon team for being willing to share their tips and experiences for today’s post!

If you’re interested in learning more about the history of the game and how it got started, check out Episode #25 of Titans of Text – it’s worth a listen! Then, visit Alter Aeon’s trivia page to learn how the game got its name, among other interesting tidbits. Happy MUDing!

10 Ways to support your favorite games