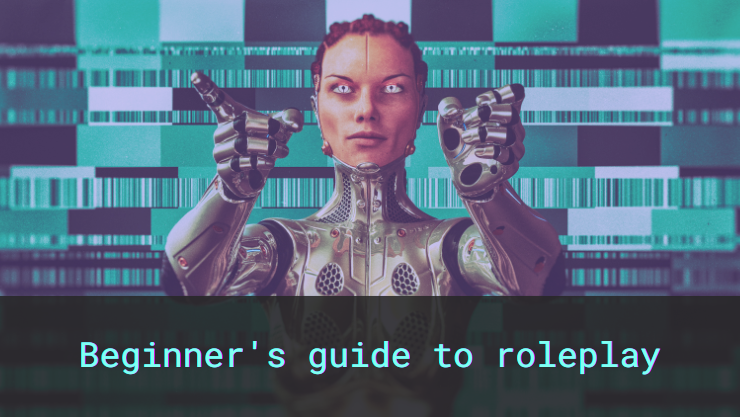 What is roleplay (RP), and how do people do it? In this step-by-step guide, I’ll walk you through the basics of roleplaying online.

This guide is suitable for any game that uses text commands for RP, including:

Of course, each game has its own rules and roleplaying culture, but this beginner’s guide to RP will introduce you to the essentials.

I’ll also suggest other helpful resources in case you want to kick your RP up a notch.

Roleplaying (or role-playing) is when you take on the role of a character and perform actions and dialogue on behalf of that character rather than as yourself.

In order to roleplay with other player characters online, you’ll need to understand a few more important roleplaying concepts.

Here are the essential terms, acronyms, and concepts that you’ll need to know to get started:

And that’s it! Those are the essentials. Now let’s take a look at these concepts in action.

How to roleplay online, step by step

People roleplay for all kinds of reasons, but at its simplest, roleplaying is a game of make-believe. It’s about pretending to be someone else.

Below, I explain how to roleplay with text in a multi-user dungeon (MUD). MUDs were the precursors to MMORPGs, so you’ll find that a lot of the syntax is quite similar.

Don’t worry, I’ll also include some tips specific to video games and chat servers later on in this guide.

But first, let’s go over the basics with some examples.

Step 1. Get in character

In order to roleplay, you need to get in character.

What this means is that you need to put yourself in your character’s shoes, or hooves, or flippers – whatever the case may be, and imagine what it’s like to be that character.

You don’t have to get too detailed right away.

The point is: you need to see your character as an entity separate from yourself. Someone with their own desires and motivations, likes and dislikes. Even their own flaws.

Once you have a basic idea of where your character is coming from, you can roleplay as that character. Until then, you’re simply playing the game as yourself – rollplaying instead of roleplaying.

If you don’t know what your character is like just yet, that’s okay! You can skip ahead to Step 2 and keep learning the essentials.

Next, you’ll want to practice acting on behalf of your character. If your character is the friendly sort, they might want to wave at others in the area.

So let’s give waving a try.

Simply enter the word wave into the command line and hit enter.

Shortcuts like this one are sometimes called socials, because they’re primarily used for socializing.

(Not all games have socials, though, so if your game throws an error, skip down to the section on freeform emotes below.)

Games with socials typically have lots of options to choose from.

Give some of these a try:

How to write custom actions for your character

Custom emotes are actions that you write out yourself in free-form. They’re a way to express your character with a unique flair or when there isn’t a social for what you want your character to do.

How you execute these actions will depend on the game, but they tend to follow similar patterns, just like socials.

Let’s try writing a custom emote for a pirouette.

A pirouette is a pretty specific move, so there’s a good chance there isn’t a social for it in your game. It’s a ballet term that means “to whirl about” in French. Think: spinning around on the toes of one foot.

To have your character perform a pirouette, enter the following into the command line:

By default, the emote will be printed with your character’s name at the beginning, like so:

As you can see, emotes are a really flexible way to express your character! Just remember two things:

Indeed, much of the fun of roleplaying comes from interacting with others, so let’s look at how to include other characters in your emotes.

How to include other characters

If you’re playing a MUD or MMORPG, there are specific ways to include other players with your actions. Instead of just waving to the area at large, you can wave at someone, for example.

Try finding another character and entering a social command followed by their name (or a keyword in their description), such as:

What about with a custom emote, though?

Well, MUDs often have special commands for including others in custom emotes. They can vary quite a bit from game to game, so my best advice is to look up HELP EMOTE in whatever game you’re playing and take a look at the recommended syntax there.

Otherwise, including other characters is usually as simple as adding their name to your custom emote. For example:

Now that you know how to emote, let’s try some dialogue!

Eventually, you’ll want to talk to someone in character, so let’s practice speech.

Simply type say followed by your message, then hit enter. For example:

Some MUDs will allow you to target another character with speech so that they know you’re talking specifically to them. Check HELP SAY to find out if the game you’re playing has a sayto option.

You can also try including speech in your custom emotes:

Step 4. Stay in character during RP

Now comes the hard part for many players: staying in character.

Staying in character means avoiding references to anything OOC or from real life in your roleplay.

In other words: your character should not be talking about YOUR life, YOUR favorite sports team, YOUR plans for the weekend, or anything else having to do with you, the player.

It also means not talking about the game’s mechanics in-character.

For example, your character would never say something like, “What’s the command to eat this hamburger?” or “How many points of damage does this weapon do?” These are questions that you, the player, would ask, but they would seem really silly coming from your character!

Fortunately, games usually have a way to distinguish IC from OOC communication so that your fellow players know when it’s you doing the talking and not your character.

In MUDs, this command is often osay or ooc.

The osay command is sometimes limited to the room you’re standing in, whereas ooc may be the game’s global (gamewide) OOC channel.

Many MUDs also have a help channel specifically for new players (newbies) to ask questions.

Again, every game is a little bit different. For further guidance, try looking up syntax under HELP OOC, HELP CHANNELS, or HELP SAY.

When you’re ready to take your roleplay to the next level, it’s time to immerse yourself.

This means blending aspects of your character and the game’s setting into your roleplay.

Examples include using thematic slang terms in your character’s speech or heading to the nearest tavern so that your character can enjoy their favorite drink among friends.

Immersion also means treating NPCs as if they’re real people in the game world – people with stories, goals, and lives of their own.

Note: I’m not saying you should spend hours having one-sided conversations with NPCs, but you can blend NPC activities into your emotes. For example, when your character buys a pint of beer, they could thank the NPC barkeep and tip them.

By including NPCs in your RP, you’ll help bring the game’s setting to life. Not just for yourself but for your fellow roleplayers, as well.

For more tips and tricks, I recommend reading my full guide to immersive roleplay.

Roleplaying with text in with chat windows

Here are some tips for roleplaying in a game with a chat window, such as an MMORPG or Roll20.

To start, you’ll want to place your cursor in the input line of the chat window and enter a forward slash before the emote. For example:

To wave at someone:

Servers and services with text chat, such as Discord and Roll20, don’t have socials per se, but they do have a way to free-form emote.

If /emote doesn’t work, try /me. The syntax can be a little different depending on the game.

Note that World of Warcraft and Star Wars: the Old Republic both use /emote, but GTA Fivem, Discord, IRC, Roll20, and other chat services may use /me.

And finally, in-character dialogue and out-of-character communication work quite similar to MUDs:

For in character speech, you can also try /yell or /whisper. Commands can often be shortened, too, so try /e, /s, /y, or /w.

And there you have it – a simple introduction to roleplaying with text!

I hope you found this to be a useful introduction to roleplaying online. If you’re interested in delving deeper, here are a few more resources that you may find helpful:

And when you’re no longer a newbie, you might check out some tips for welcoming and including new players in your favorite RP game.