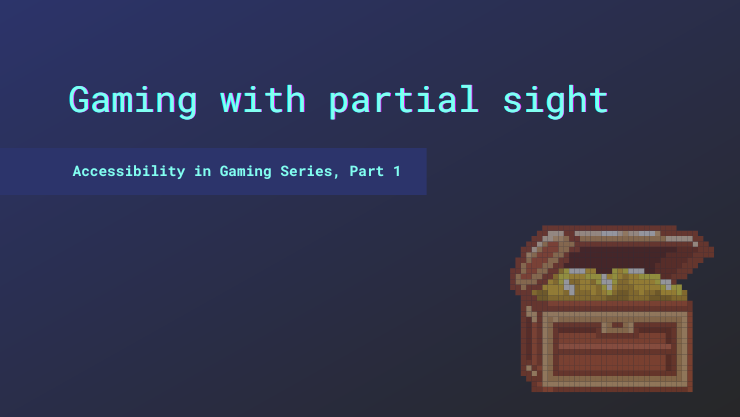 Today’s post is part of a series on accessibility, including the topic of gaming with partial sight. In particular, it’s a chance to share the perspectives of Aaron, a partially-sighted gamer: what matters to him, what he looks for in a game, and what he thinks game creators can do to make their games more accessible.

Why do I care? Well, I grew up in a single-parent household, and the parent who raised me was deaf. The experience had a profound impact on the person I became and still affects the person I am now. But I’ve learned that situations like that can be difficult for other people to understand if they’ve never had much exposure.

So for me, this series is not only about educating myself but hopefully providing something of value to others.

It’s also an opportunity to make a few new friends along the way. 🙂

To start, I wanted to know more about how non-sighted and partially-sighted gamers experience some of my favorite games. What are game creators doing right, for example? And what could they be doing more of – or better?

I put out a general request for interviews, and Aaron answered the call. He graciously let me pester him with a few questions over Discord and allowed me to share his story.

To kick off the interview, I invited Aaron to tell readers a little bit about himself, including something fun or unique.

“So, my name is Aaron Weaver, I’m actually a partial visually impaired person from the great state of Michigan,” he said. “I’m not only a gamer, but I’m a musician. I am a flutist, pianist, and vocalist. I’m a huge fan of reading, especially fantasy, and I also am an amateur writer.”

Aaron and I have played some of the same multi-user dungeon games, and I was curious as to how he got started. I asked him how he first became hooked on text-based RPGs.

“Well, I was actually a visual gamer before I was a MUDer,” he explained.

“My twin, who is a huge gamer, has the same eye condition as I do, and his vision lasted longer. We had to sit about 2 feet away from the TV screen to see, but we did just so we could play things like Final Fantasy, Dark Cloud, and Star Ocean. I was a huge fan of JRPGs and had played every Final Fantasy game that was on a console where I could see them, up until the release of Final Fantasy 14.”

Around the year 2011, Aaron’s vision started to get worse, and he eventually had to take a break from video games because he couldn’t read the screen anymore. But that didn’t stop him from gaming.

“From there, I went to MUD games simply because I wanted a challenge,” he said. “I hated RP MUDs at first, but then I figured out it’s really about telling a story, and I’ve been MUDing ever since.”

Aaron and I dove further into the topic of accessibility in gaming, starting with video games.

When asked about the accessibility features most important to him, Aaron said, “It’s funny that you ask that. We’ve seen a lot of games in the digital format, Hearthstone, World of Warcraft, that we’ve not seen before.

Hearthstone is the big one right now. It’s games that need only a layout that’s easy to read the cards, see what you have in your hand, and it’s all done with things that are linked up to a screen reader.

This is a huge step. It’s like, Oh, I can play this game and I don’t need graphics. It’s more of that kind of thing we need. Ways to make games like that accessible.”

Aaron added to the list, “Good audio is important. Interfaces that are easily converted to that kind of format. Maybe beacons for certain kinds of graphical games that rely on sound, like they’ve done with World of Warcraft. A lot of those features are good.”

(I haven’t been a Blizzard customer for several years now, but in case you’re curious, here’s some info on accessibility updates in World of Warcraft.)

What is a beacon?

UPDATE (5/7/22): We received a few questions from readers about what is meant by “beacons.” To sighted players, this might be an unfamiliar term, so I asked Aaron if he would define it for us in the context of video games.

He said, “A beacon is binary audio. It’s a sound that is able to be rotated around you, so you just line your character up so the sound is forward and walk straight, like echolocation in a way.”

They’re also called sound beacons, audio beacons, or radar sounds. If you’re thinking about developing a game, I recommend checking out this post on how to do so with accessible audio in mind.

Next, I asked Aaron what he thought about accessibility in text-based RPGs. I’ve played a lot of MU* games over the years, for example, and I know they can’t all be equally great for gaming with partial sight. So I was curious as to what features matter to Aaron the most, as well as how things have changed over time.

“Well, the biggest trouble I’ve had has been either A) in reading maps, where things like traveling and getting around is so important, or B) combat is super fast and there’s no way to follow it without sound cues,” he said.

“ASCII depictions of things is just a huge wash, so really in MUDs, a way to turn that off would be almost necessary, but sometimes it’s the actual combat speed which is terrible for blind MUDers, especially with hack and slash.”

To fix that, Aaron suggested that game creators test combat in their games using screen readers, both with and without sound packs.

He also added, “[They should look for] ways to eliminate graphical elements while having a nice readable format that can be digested quickly. These are huge huge things for blind players.”

What else does Aaron look for in a text-based game?

“I look for like a variety of factors when I pick a MUD,” said Aaron. “I like MUDs with crafting that’s intricate while also interesting. Games with alchemy systems, or mage craft systems make me happy. The more materials I get to gather, and the more it makes me feel like I’m actually whipping up a potion, or getting involved in the process, the better.

I like games that have good staff, good lore, good roleplay. That means that people try and tell a story. In hack and slash MUDs, It’s a little different because there’s no roleplay, but if the game has crafting, if it has skills that make it feel like a JRPG, if it has a world that is really interesting and paints a picture, I enjoy it 9 times out of 10.”

Aaron and I may not share the same political views, but I was struck by just how much I have in common with him when it comes to gaming. His words reinforced the idea that non-sighted and partially-sighted gamers play games for the same reasons many of us sighted players do – something I understood intrinsically but never put much intentional thought into before.

I thought Aaron’s feedback on accessibility and gaming with partial sight was quite useful, so I asked him if he had any advice he’d give to other players in his shoes – or if there was anything he wishes he’d realized sooner.

“I think in the case of RP games, there can come a point where you’re in an environment that asks too much of you,” he said.

“For people with mental illness, like myself, you can leave at any time, and if you pick a good game to play, they’ll let you do that and not give you grief.

Ultimately, you do not owe the internet anything. Put the games down every once in a while. The second thing is, definitely take time to actually give a game a try. See if you like it before you just log in once and say Huh, it might be difficult and then leave.”

Honestly, I thought this was pretty good advice for anyone with any level of sight. Aaron also touched on a topic I think about fairly often, which is what feels like a shrinking MU* community:

“If you find a MUD and the community is good, and the people are nice, definitely stay there,” he said. “Frequent it, and try and bring people who are into your same interests to the community. The MUD community is starting to fade out, but there’s still fun things in the genre, so bring people who wanna try it around. Maybe not an RP MUD first, but there’s plenty of hack and slashes that might be fun to try.”

One of the last questions I had for Aaron was about games he’d recommend. He said:

“I would recommend Harshlands if you’ve either played the tabletop or like learning huge bits of lore and play in a really unique setting, but don’t like huge paragraph screen-busting pose lengths.

I’d recommend Shadows of Isildur for RP that’s very much Lord of the Rings.

Alter Aeon is a real standard hack and slash, and they have sound packs for both sighted and unsighted players. There’s literally a MUD for anyone.”

A huge, warm thank you to Aaron for taking the time to chat with me and for sharing his perspectives on gaming with partial sight. He provided his Twitter handle (@AaronW2018) in case you’d like to send him a DM or just want to say hi.

How to be a better game master