How to be a better game master 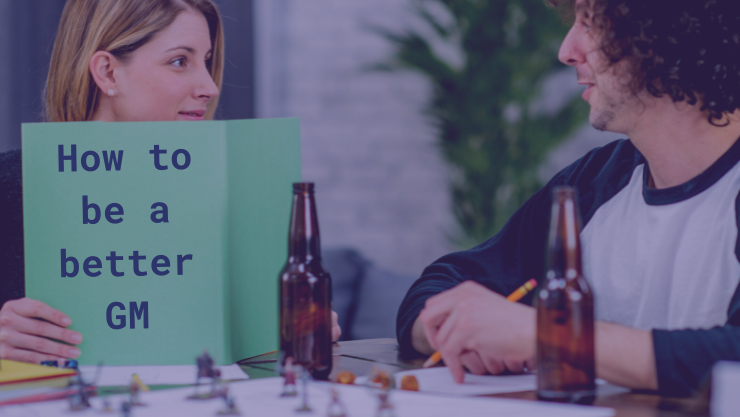 From time to time, people ask me for advice on how to be a better game master or how to run more engaging roleplay events. I’ve tossed out my ideas piecemeal before, but I’ve never distilled my thoughts into a list of actionable steps. Today, that changes!

Below are my top 10 tips for becoming a better interactive storyteller, especially in the context of real-time writing and roleplaying games.

The tips in this post can be strategically applied to:

Note: I’m going to use the terms “game master” and “storyteller” (defined in the glossary), but among text-based RPGs, you might also hear the terms “storyrunner” or “plotrunner.” Basically, this post is for anyone who runs roleplay events, regardless of their exact title.

Though, personally, I prefer the term storyteller. 🙂

Interactive storytelling for each type of writing game comes with its own set of challenges.

Unlike regular tabletop sessions among friends, with MU* and chatroom RPGs, you often don’t know who will show up for an event until the moment it starts. As a result, improvisation becomes a lot more important – and planning can have diminishing returns. For that reason, I try to be thoughtful in my planning and account for possibilities, but I don’t spend a ton of time on the particulars.

For example, I might leave room in my session for a rogue to pick a lock or a gunner to blast through a door, but I usually allow for a few alternatives in case a rogue doesn’t join the party or the gunner isn’t available that day.

Just something to keep in mind as you peruse the tips below. Regular tabletop sessions require improvisation too, of course, and part of the fun from the perspective of the GM/storyteller is just seeing where players take the story.

How to be a better game master or storyteller

First, a disclaimer: I’m not perfect, and I probably don’t check all the boxes 100% every single time. To be a better game master, you don’t have to hit every single one, either.

The list below represents goals to aim for, not a baseline requirement. So don’t feel like you have to do everything perfectly the first time. Much of what I’ve learned, I learned through trial and error and just figuring out what worked well for the game I was playing. You will, too.

For your next event, try focusing on one or two areas that could use some TLC:

If you read other articles on how to be a better game master (or dungeon master), you likely won’t find this tip on the list! That’s because other how-tos already assume you have a regular captive audience. With open events and sessions, however, that’s not necessarily the case!

Indeed, you can plan out the most amazing story event ever, but it’ll be a wash if no one shows up. So the first thing I do after creating a general plan is to market my game event.

Some things I try to do each time:

If you already know who’s coming to your event, you don’t necessarily need to advertise, but you might still want to hook players with a teaser to get them pumped about it. 🙂

The next step, when you’ve got a group together, is to set the scene and the tone for the event. Explain what the party is walking into and remind them why they’ve gathered. For example, maybe they all heard a distress call, saw an advertisement, or received a secret note.

That said, you can usually leave the details of character motivation to the players themselves.

You don’t have to tell Billy the Warlock that his curiosity was piqued, only that he received a summons. Leave it to him whether he arrives out of curiosity, indignation, or fear of reprisal.

I often see game masters ignore this step, and I think they’re really missing out on an opportunity to get players psyched and in the zone. To really immerse them in the story.

How you describe the opening act can set the tone for the whole event. If you want it to be fun and lighthearted, be sure to convey that in your scene-setting description.

That said, you should make sure the tone stays IC and doesn’t bleed over into player communications. Try to keep all OOC chatter chill, no matter how dark and intense things get for the characters during the story. One of the best ways to do this is to set a good example. Players will take their cues from you.

Tip #3: Create a sense of urgency

Once the scene is set and everyone’s on the same page, a tactic I commonly like to use is to introduce a sense of urgency. This helps to focus everyone’s attention and build some forward momentum.

Perhaps someone is in immediate danger, there’s a ticking time bomb (literal or figurative). Or, there’s a flash sale of extremely rare goods.

Whatever the premise, the point is to hook players and get things moving. Even if you’re just staging a tavern brawl, you have the opportunity to introduce urgency in the form of:

If your event is purely social, it may not make sense to throw a burning building in the mix (or maybe it does!), but there could be a celebrity passing through. Maybe attendees need to move fast if they’re going to grab an autograph. 🙂 You get the idea.

From here on out, it’s all about maintaining focus on the story and engaging players. Is someone lingering on the sidelines, unsure of what to do? Does the party seem stumped by what’s expected of them?

These are signs that you need to focus and engage. If I had to choose the most important tip from this guide, this would be it.

Personally, I’ve found that the quicker you can help the group select a leader (whether official or unofficial) and give them a task, the better.

No one wants to spend two hours just trying to figure out who is in charge before the excitement really begins. Sometimes, someone will quickly step up to the plate and identify a next step; at other times, you might need to give the group a nudge.

For most players, this is the fun part. This is where the teamwork (or backstabbing) happens!

To be a better game master, you don’t need to spend hours upon hours concocting a super complicated fight scene or puzzle, though. Invariably, someone’s going to pick an action you didn’t anticipate anyway.

The key is to find some way to run with the unexpected, especially if it’s clever, creative, or compelling.

If you need to, ask for a short break so that you can decide how to move forward. Your players will be understanding, especially if they just threw you a hefty curve ball.

Don’t forget to reward players if they come up with something particularly awesome! Whatever currency you choose, bonus points are great for positive reinforcement.

If you’re ready to delve a bit deeper, it’s time to use what you know about individual members of the party to really hook them and engage them. Is the gung-ho combat character getting enough action? Is the medic getting to perform first aid? Has the rogue picked any locks, yet?

This is where those improvisation skills can come in handy.

Even if this is your first time GMing for these characters, you can still play to their strengths. Review their character descriptions and pay attention to their activities at the start of the story. The details will clue you in and provide you with something to work with.

By that, I mean really kick them in the feels.

Use a character’s flaws or weaknesses to hook them instead of only capitalizing on what they do well. Imagine: an evil witch who threatens harm upon a warrior’s only daughter, or a cruel corpo who knows all about someone’s stim addiction.

The point is: make it personal. For the characters, that is.

When executed well, this strategy can be really effective because it often means that other members of the team will have to swoop in to provide support.

Chances are, your story contains a few tropes. Mine often do. Tropes are popular for a reason, after all. They’re familiar; they’re tried and tested. The trick here, if you want to be a better game master, is to keep the story from being too stale and predictable.

To keep players on their toes, I usually like to throw a curveball or two.

Try to present a twist they didn’t expect. Maybe a detail that seemed inconsequential at the start suddenly becomes critical to the story. Maybe the villain they thought they were after is really a victim.

Now this tip you will find in other guides on how to be a better game master, and for good reason. If players feel like their activities are inconsequential to the story, they’re going to be less invested in the journey. It’s as simple as that.

Not every action and every roll of the dice needs to have some huge consequence, but if the roll wouldn’t change the outcome or whatever happens next – don’t ask for the roll.

This last tip can be hard to stick to sometimes, but I still think it’s important to close out the event.

If it was an hours-long open event, you might have gained a few players and lost some along the way, but a wrap-up is still worthwhile. Usually, I’m pretty braindead by this point, but I try to use this time to resolve any lingering questions or loose ends and give everyone a chance to see the results of their efforts.

During the wrap-up, you can use the NPCs you created for the story to:

If you intend to host a sequel, the wrap-up is a great time to toss out a teaser for it or introduce a cliffhanger.

And to really end on a positive note, don’t forget to thank everyone for attending your event!

Takeaways on how to be a better game master

You might have noticed that nowhere in the 10 tips above did I talk about story content. That’s because when it comes to real-time interactive story events, the premise of the story matters far less than your approach.

If you want to be a better game master, start with better engagement.

A story can have the most interesting premise in the world, but that means little if you can’t engage other players and help them enjoy it with you.

On the flip side, even the simplest storylines can be extremely satisfying for players when approached in a thoughtful way.

I’ve run entire events around simply saving a boy from a well or fetching a cat from a tree, and it all comes down to:

9 times out of 10, if you can answer yes to the above questions, it doesn’t matter how hokey the story’s premise or how rocky it started, players will still enjoy themselves and have fun. They’ll walk away feeling like the event was worth their time.

Of course, not every event will meet everyone’s expectations – you can’t expect to please everyone all the time – but if you want to be a better game master, the tips in this post can help get you a little bit closer to your goal.