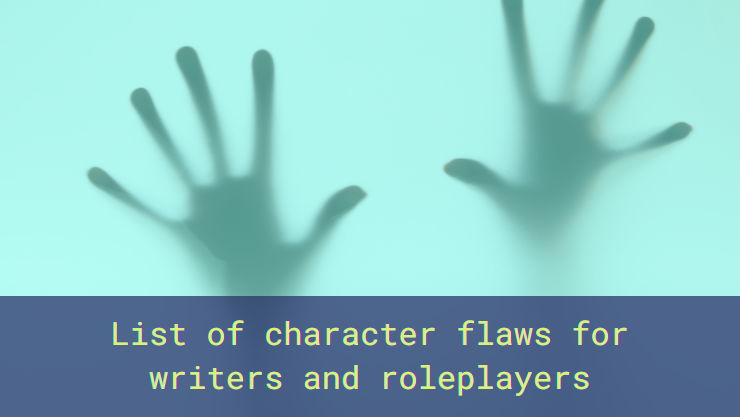 Flaws can make your characters more dynamic, relatable, and compelling. They’re a great way to humanize your characters and give them depth. To that end, I’ve created a list of character flaws you can use in your writing and roleplay.

The list is skimmable, straightforward, and designed to help you quickly and easily find some flaws that will work for your character concepts.

But first, let’s discuss what a character flaw is – and what it’s not.

What is a character flaw?

When one talks about flaws in a person, they often mean flaws in one’s moral fiber, such as a bias or prejudice that affects their sense of right and wrong.

But character flaws can actually be anything about a character that poses challenges, creates conflict, affects their interactions, or drives their story.

Also, it’s important to note that while people tend to use the terms “character flaw” or “character defect” interchangeably, nothing here is meant to cast real people in a negative light. The list below is merely a tool for use in one’s creative writing.

After all, one of the reasons people write and roleplay is to step out of their own shoes and imagine what it would be like to walk in someone else’s. It’s a way to foster empathy and respect for other human beings (or orcs, or elves!) – and that’s the spirit in which this article is written.

Why are flawed characters interesting?

Flawed characters are compelling because they create tension and add depth and realism to the story.

As human beings, we all make mistakes, experience bad luck, and deal with our own imperfections. Thus, we often sympathize with flawed characters and want to know where their troubles will lead – whether toward success or failure.

How many flaws should a character have?

In literature, characters typically have one major flaw that drives their story and a few minor flaws that help them stand out in readers’ minds.

Characters can also have something called a tragic flaw, which is a flaw that leads to their death or downfall.

What is a minor flaw?

Minor flaws are things that help distinguish the character in readers’ minds and make the character more interesting or relatable. These flaws often color interactions with other characters but aren’t the driving force behind the story or the main source of conflict.

In other words, these are typically surface-level facts or details that make the character stand out, both to readers and other characters in the story.

If you’re a roleplayer, these details might make for an interesting RP session when they come into play, but they’re probably not things that will impact your character’s story in a major way.

What is a major flaw?

Major flaws are those that shape the character’s story arc. In literature, they’re often obstacles that must be overcome in order for the character to achieve success, growth, or significant change.

In roleplay, they are often sources of conflict between player characters.

As you can see from the above examples, whether a flaw is considered major or minor isn’t so much about the severity of the flaw itself. Rather, it’s about how important that flaw is for driving the character’s story.

Thus, a limp by itself is a minor flaw. But if we give a character the false belief that they’re worthless because of their limp, we now have a major flaw that can impact many more parts of their story.

With that in mind, let’s take a look at the list!

The items in this character flaws list are grouped by category to make it easier to choose flaws from among different types. It’s not a comprehensive list but is intended to give breadth (and some depth) into the possibilities.

Chances are, you have an allergy or are related to someone with an allergy, so you know just how much they suck.

Allergies can be mild and inconvenient, or they can pose life-threatening danger. They can be common or quite rare. People can be allergic to nearly anything, so there’s a really wide variety of flaws to choose from in this category.

Some well-known real-life allergens and irritants include:

See the Asthma and Allergy Foundation of America website for more information and examples.

If you’re writing for/roleplaying in a fictional setting, you can also make up your own allergens and vulnerabilities. Everyone’s heard of kryptonite, right? 😁

No one is perfect, and the vast majority of us would change something about our bodies or appearance if we could.

There are many, many character flaws that could go in this list, so I’m just going to start by tossing out random ideas (some from personal experience):

The key here is that in order for the item to be considered a character flaw, it needs to be something that creates conflict or presents a challenge.

For example, having huge feet isn’t really a flaw unless the character is self-conscious about it, gets teased for it, or trips a lot.

Similarly, if a character’s gray hairs are portrayed in a positive light (makes them look “distinguished”), then it’s more of a feature and less of a flaw. The point is, it’s all in how you write it and want it to be perceived.

Just remember to be sensitive to your audience and avoid turning flaws into caricatures that might upset others in your community or audience. The goal is to make your characters more relatable, not to make people feel belittled or marginalized.

Phobias are extremely common and can range in severity from mild to crippling. A person can have a fear of pretty much anything, even a fear of fears (phobophobia), so there’s a huge realm of possibility. In fact, you probably have at least one or two mild phobias, yourself.

Here a list of character fears to get your creative juices flowing (unless you have a fear of juice, in which case pretend I didn’t say that):

If you’re writing for a fictional setting, you might also think about things like fear of magic, dragons, teleportation, etc.

Regardless of what you call it, flaws having to do with personality traits or behavior include:

If you’re just looking for a list of character flaws that fall into this category, you might also find this collection of Negative Traits useful.

Roleplaying flaws such as prejudice

Character flaws having to do with prejudice and discrimination can be tricky in a roleplaying context.

Many games outright forbid things like racism and sexism – not just because these things are triggering and divisive but because the admins want to avoid promoting them, even in make-believe settings.

If you’re using this list of character flaws for the purposes of creating a character for a writing or roleplaying game, please make sure you fully understand the rules and expectations of the game you’re playing and try to be conscientious of how your roleplay will affect others.

At the end of the day, there are a lot of other flaws to choose from that are less controversial but can still create in-character conflict and tension.

This last group in the list of character flaws contains anything and everything I could think of that didn’t fit neatly in the previous sections, though there might be some overlap.

Some are popular tropes or mannerisms, some are legitimate medical disorders, and some have to do with skills or demographics.

Again, nothing in this list is meant to offend. Be sensitive toward your audience, and remember that the point is to humanize your characters.

When referring to flaws that can be described as medical disorders or disabilities, I recommend looking over the Disability Language Style Guide. It’s a resource for writers and journalists that can help you use generally accepted language and avoid writing about disabilities in an offensive way.

The style guide is also listed at the end of the glossary.

How to use the character flaws in this list

So you’ve chosen a few items from the list of character flaws. What’s next?

Everyone’s creative process is different, but one of the reasons to choose flaws in the first place is to give the character something that will help drive their story, such as a challenge they must learn to grapple with in some way.

You can use flaws to:

Personally, I like to reserve a couple of less obvious flaws to reveal slowly or subtly over time to keep things interesting, but how you use the list of character flaws is up to you!

What is metagaming in RP + 5 examples