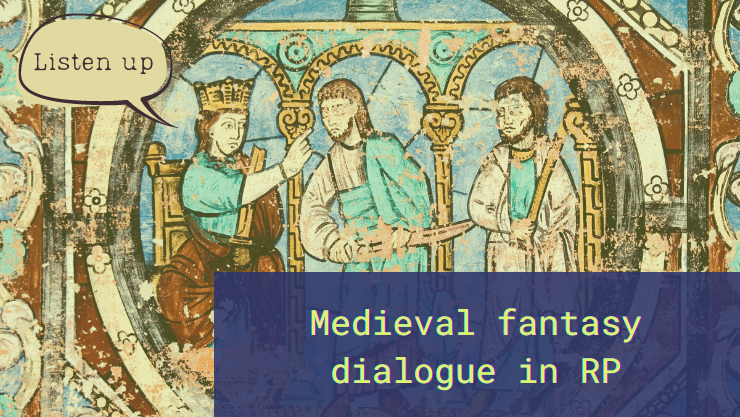 If you’re like me, you’ve probably spent some time playing games with medieval fantasy dialogue. After all, pseudo-historical themes are pretty common in the roleplaying world.

But how do you choose which medieval-sounding words and phrases to use? And should you use speech that’s flowery, formal, or maybe even… GASP! …a little bit more modern?

Fortunately, there are several ways to go about adopting a medieval vibe in your character’s speech without necessarily being an expert in Middle English or even Early Modern English.

For today’s post, I invited fellow roleplayer Amika to share some tips and examples from her guide on archaic English dialogue. You may remember Amika from How to use a character arc roadmap in RP (July 17, 2022). I’m excited to have her back to share more of her roleplaying tips and advice!

But first, let’s take a quick look at some facts and why they (don’t) matter.

What is Medieval English?

Medieval English, or more accurately Middle English, was a form of English used in the Middle Ages, from around 1100 to 1500 AD.

Middle English was spoken in various parts of England, Wales, Scotland, and Ireland. It was preceded by Old English (surprise!) and followed by Early Modern English.

However, the English you hear in medieval-themed movies is not Middle English. That’s because to our modern ears, Middle English would sound almost unintelligible.

I’ll show you what I mean.

For context, here are some examples of writing and speech from different time periods.

(If you use a screen reader, I apologize in advance if any of this sounds garbled – I’m not sure how the non-standard characters are going to translate to speech.)

If you understand this, you’re probably a student of literature or history. Feel free to write the rest of this blog post for me, because you know way more than I do.

The words may seem strange at first, but if you slow down and try sounding them out, they might make some sense to you.

As you can see, English was a different beast half a millennia ago. These are all written examples, though. What about audio?

Examples of Middle English with audio

To hear an example of medieval speech, check out the Wikipedia page for The Canterbury Tales.

Chaucer wrote The Canterbury Tales (or Tales of Caunterbury) in a dialect of late Middle English, between the years 1387 and 1400. You can listen to a passage being read aloud in what basically amounts to an audio reconstruction of the past.

Because you have to remember, there’s no one alive today that was speaking English back in the Middle Ages (save for the odd vampire, and they don’t usually like to out themselves).

So it’s all just our best guess on what it sounded like.

Here’s a fun introduction to what we do know:

As Thatguyinlitclass points out in the video, the Middle Ages had many dialects and not much consistency. 😂

In short, the English language has changed a lot in the past 500+ years!

Instead, it’s a list of ideas and suggestions for adding medieval flavor to your dialogue and roleplay.

“Some of us be well advise-ed to take the pill which chilleths.”

Lorraine Mangan
How to Talk at a Renaissance Faire (comments section)

So, now that you know you won’t be roleplaying any actual medieval dialogue, you can relax a little bit.

Sure, people can be pretty opinionated about the “right” way to harken back to a fictional medieval past (Tolkein is a beloved example), but remember – you’re not trying to win an Oscar or a Pulitzer, here. The goal of roleplaying is to have fun.

Thus, it’s a chance to find your own style – something that works for you.

That said, here are a few quick tips to help you get started on your journey:

And now, without further ado, I present Amika’s guide to sounding medieval-y!

A guide to Archaic English for roleplayers

Characters speaking in Middle English would make any game confusing and inaccessible, so I put together a list of frequently confused/misused archaic “flavor” terms in case you’d like to add a little color to your dialogue.

I don’t go heavy on this, personally – I slant more towards localization, phrasing things so that they sound as natural to the present-day reader as they would sound natural to a person of that time, in that setting.

But it can still be fun, especially if you play a troubadour, noble, or other character who’s supposed to sound out of the ordinary.

Note that most of what’s being referenced here is actually from the more familiar Early Modern English (e.g. Shakespeare) – not Middle English.

“Thou” sounds fancy and middle-age-y so a lot of people are tempted to use them in formal situations, but originally “thou” pronouns were used as intimate informal pronouns.

Same for past tense, which sometimes sounds weird to us, but just roll with it (thou wast, didst, hadst, lovedst, saidst).

Imperatives generally drop the -est ending, though (“Run back to thy mother!”).

“Mine/thine” can be used interchangeably with “my/thy”, sometimes after the noun just to sound a little flowerier (“Hello, brother mine”).

“Thou’lt” is a contraction of “thou shalt” or “thou wilt”, but I will laugh if I hear it in character.

Verbs can be conjugated in the third person with -eth if you want to sound a little more poetic (“Thy cup runneth over”, “He doth protest”, “Hell hath no fury”).

Past tense is conjugated in a manner similar to modern English (“He did”, “She was”, “They had”).

For more examples, see this page on archaic verb conjugations.

Also for a little extra poetic flair, put the object after the verb when you’re asking a simple question (“What say you, my Lord?”, “What hath she?”, “Hast thou already finished whittling mine bumpaddle?”).

Tip: It’s easier to remember if you do a ‘Poirot’ accent.

Below are some frequently confused words to watch out for when adopting your own medieval flavor:

“Who” is a subject, and “whom” is an object. It’s nothing to do with formality. My mnemonic is just to remember the phrase, “Who did what to whom?”

In Romeo and Juliet, when Juliet asks, “Wherefore art thou Romeo?” it’s part of the “a rose by any other name” monologue – she’s not asking where he is, but why he’s called what he is.

Thanks so much to Amika for letting me share her guide to Middle Age-y flavor terms! And don’t forget to look her up on Twitter, as she might still be offering character art commissions.

Once you’ve settled on your own personal medieval style, why not flaunt it while crashing some medieval parties?