What is metagaming in RP + 5 examples 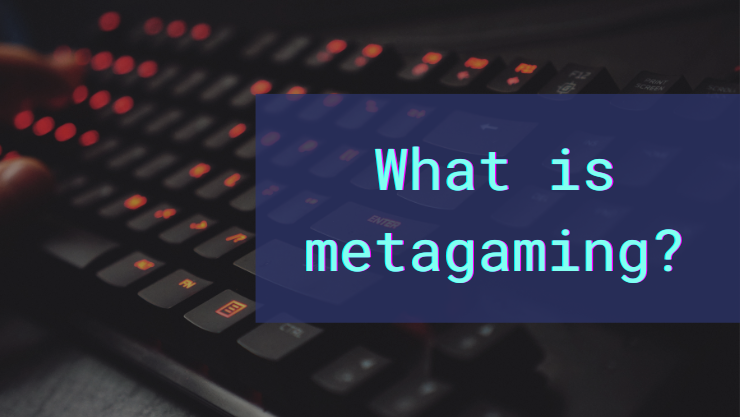 Have you ever heard someone accuse another player of metagaming? Perhaps you’ve seen the term but weren’t sure what it meant.

In this post, I define the term metagaming (sometimes written as meta gaming or meta-gaming) and provide several examples of metagaming in roleplay.

I also offer some advice for avoiding or reducing harmful occurrences in your favorite RP game.

What is metagaming in RP?

Metagaming (meta gaming or meta-gaming) refers to the in-character use of any knowledge that you, the player, have that your character would have no reasonable way of knowing.

In the context of roleplaying games, the term is most often applied to situations where a player’s real-life knowledge of the game affects their character’s behavior, usually in a way that disregards the character’s established personality, history, or abilities.

Because this is seen as “breaking character” or behaving out of character (OOC), it’s often frowned upon by serious roleplayers.

Metagaming can happen in any multiplayer game where there is roleplay, including Grand Theft Auto (GTA), Project Zomboid, Dungeons and Dragons (D&D), and multi-user dungeons (MUDs).

What are some examples of metagaming?

Some examples of metagaming in RP include:

Metagaming isn’t a concern in all types of games or in all situations. Keep reading to learn more about when it’s considered harmful versus an accepted practice.

Is all metagaming bad?

No. Not all metagaming is necessarily bad. Whether and to what extent it’s considered harmful depends on the game’s roleplay culture and the expectations of the community.

The term itself is usually reserved for behavior that is seen as cheating, undesirable, unsporting, or undermining the spirit of the game.

However, some activities that might technically fall under the definition of metagaming are actually considered helpful or necessary in many contexts.

For example, consider a gruff, unsociable character going out of their way to help a newcomer to a game. The behavior (helping a newbie) might be OOCly motivated and require breaking character, but many players would consider it good for the game or community.

5 Examples of metagaming in roleplay

Below are 5 specific examples to help readers better understand the concept and its limitations:

1. Pursuing secrets in-character based on your (the player’s) knowledge of their existence

EXAMPLE: You, the player, are aware that there’s a hidden treasure in a secret location. You know about the treasure because another player told you about it. Or, because you found out about it on a previous character. You take your current character to the location to search for it, even though your PC has no knowledge of the treasure or its location.

While definitely metagaming, this behavior is considered perfectly acceptable in some games and is deeply frowned upon in others. Consulting the game’s policies and/or community will usually tell you whether or not it’s okay.

Generally speaking, serious roleplaying games take offense to this kind of metagaming, whereas hack-n-slash and casual adventure games do not.

If metagaming is allowed to occur because of a bug, typo, or info that shouldn’t be available to players, the term “twinking” applies.

(Tip: If you’re an admin, consider rewarding players for reporting game typos and bugs. This encourages the community to help plug holes that make your game vulnerable to twinking.)

2. Going to an in-game location based on your (the player’s) knowledge of who will be there

EXAMPLE: You, the player, are aware that a coffee shop in the game is a popular hangout. You’re also aware that several of your favorite players are currently roleplaying a scene there. You decide to take your character to that location even though your character hates coffee.

Again, many games consider this perfectly acceptable. Usually, players resolve the disconnect by making up a narrative as to why their character would be in a place they normally wouldn’t visit.

For example, they hate coffee but were craving chai tea.

Games that are okay with this type of behavior often provide players with OOC info about characters’ whereabouts. They assume that players will act on the OOC knowledge ICly; thus, it’s not considered metagaming so much as a tool to help players find each other so that they can roleplay.

3. Making assumptions based on your (the player’s) knowledge of who is playing the game with you

EXAMPLE 1: You, the player, are aware that only one other PC in the game is capable of doing X. When X happens, your character assumes their guilt and accuses that character, even though there are NPCs who also had the means or motivation to do X.

EXAMPLE 2: You, the player, are aware that a particular character was online at the time Y happened. Your character immediately assumes the other character’s guilt and interrogates them. Your character tries to get them to admit that they’re responsible for Y, even though there are other PCs or NPCs that may have had reason to do it.

Also known as “smallworlding,” the above examples are considered bad form in games with a heavy focus on immersive storytelling.

In some games, the rules explicitly forbid smallworlding in order to protect antagonistic characters and villains. These games usually attempt to maintain a balance between antagonistic and other types of interactions, e.g. social and cooperative RP.

Again, consult the game’s policies and/or community if you want to know how others will view the above behavior.

4. Using your (the player’s) knowledge of how the game works to create a character optimized to win

EXAMPLE: You, the player, are aware that a character with X stat/skills will be more likely to succeed at doing Y. You decide to give your character those qualities, even though there’s nothing in your PC’s backstory to explain why they would have them.

Also known as “min-maxing,” this behavior is likewise frowned upon in games with a heavy focus on immersive storytelling.

In games that prioritize RP, players believe strongly that a character’s background should come first; any stats and skills should be a reflection of that background.

Prioritizing skills/stats is usually seen as a desire to “win” the game, and in story-focused games, the goal is not to win but to tell a compelling story. Compelling stories require both losers and characters with flaws.

Even so, min-maxing isn’t a concern among all roleplay communities. In some games, creating a highly specialized character is considered a fun and acceptable challenge.

5. Changing your character’s behavior based on your (the player’s) knowledge

EXAMPLE: You, the player, are aware that a certain character is played by someone with a lot of influence (such as an admin or GM). Your character goes out of their way to become friends or allies with them, even though they normally wouldn’t.

Alternatively, your character goes out of their way to avoid conflict with them because you don’t want to be at a disadvantage against someone who probably knows the game better than you do or could retaliate using their influence as a GM.

Many games view these examples as unhealthy metagaming. Similar to min-maxing, they involve breaking character in order to gain an advantage or avoid a disadvantage.

Depending on the game, it’s not uncommon for players to consciously or unconsciously avoid conflict with influential players. Again, the degree to which these behaviors are considered harmful varies by game and community.

RP-heavy games will often try to keep staff alts a secret in order to prevent this type of metagaming. However, doing so can lead to a lot of speculation, rumoring, and risk aversion among players – especially if they’ve dealt with abusive staff in toxic games before.

For more examples, check out this Wikipedia article on metagaming in roleplay.

How can you tell when someone is metagaming?

Players make many decisions on behalf of their characters, so how do you know when they’ve crossed the line into metagaming territory?

This is a tough question to answer, because it’s not always easy to identify when someone is using outside knowledge in character.

In many cases, metagaming happens unconsciously and without intent to do harm. A player might allow their OOC knowledge to affect their IC activities without realizing it. Perhaps they do so in the course of trying to be helpful or to avoid a stressful situation.

It’s also a tough question because games and communities differ on what they think of as metagaming.

Metagaming typically only becomes a problem when it gives one person an unfair advantage over others.

If everyone on a server engages openly in a behavior, and the rules don’t prevent it, that behavior becomes the norm.

Consult your game’s policies. If the rules don’t explicitly draw the line between what’s acceptable and what’s not, ask the admins and game masters to add examples to help clarify.

How can you prevent or avoid harmful metagaming?

So you think your game might have a problem, what do you do? Here are some suggestions, though your mileage may vary depending on context:

To explain what I mean by the last bullet point, let me share an example from an experience I had while playing a multi-user dungeon (MUD) game:

Example of limiting a system to reduce metagaming in RP

In a sci-fi game I played, there was a public in-character communications channel that spanned an entire city populated by millions of people.

Characters would frequently call each other out over the comms channel, and players would get upset that their own characters’ voices would be so easily recognized.

And they had a point: in a city of millions of chatty people, how realistic is it to pin someone down solely by the sound of their voice? Over a channel frequently interrupted by static?

When IC tensions were high, the game’s admin would be bombarded by metagaming and smallworlding complaints, and it was burning them out.

To address the issue, the admin re-coded the comms system so that voices became associated with an IC handle similar to how you have a username in Discord that lights up when you talk.

The channel was also redefined so that it only represented the people actively using it – not millions of “background” NPCs too.

These changes made the system less susceptible to metagaming but, just as importantly, they changed players’ perceptions about it happening.

The moral of the story?

Perceptions of metagaming can be just as harmful as actual instances of metagaming, because it breeds distrust and toxicity between players.

Accusations also eat up admins’ time – time they freely volunteer, and no one wants to make a hobby of untangling player complaints.

Sometimes, for the sake of one’s sanity, it may be better to limit a system, even if doing so requires a suspension of disbelief.

Thanks for reading! If you found this post useful and informative, I recommend checking out my post on toxic gaming communities text.