The 5 basic MUD styles and you 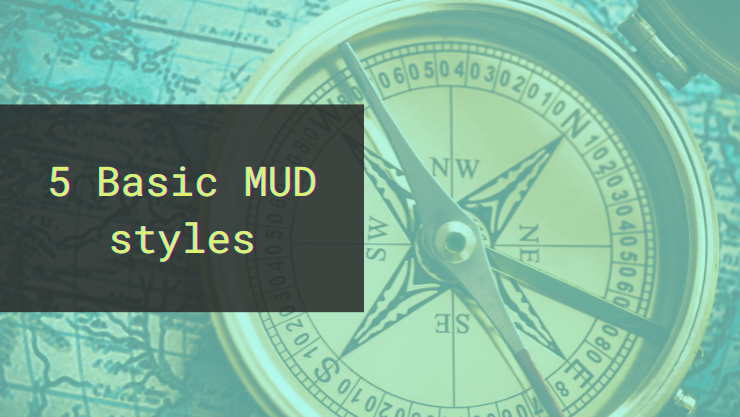 Which of the 5 basic MUD styles is right for you?

Multi-user dungeons (MUDs) come in a wide variety of flavors. If you’re new to text-based gaming, you might find the sheer number of options overwhelming. How do you know what kind of game is right for you, and where should you start?

Today’s post is designed to introduce you to 5 major MUD styles. The goal is to help you figure out what’s likely to be a better fit so that you can find a game you’ll enjoy.

The 5 MUD styles covered in this guide include:

I’ll also teach you how to find games that fit into these categories. However, it’s important to note that these categories aren’t mutually exclusive. You can and almost certainly will come across games that include both PvE and PvP, for example. More on this below.

Introduction to the 5 basic MUD styles

So, you’ve decided to give text-based gaming a try. Awesome! MUDing is a wonderful hobby – I’ve made many friends over the years playing a variety of multi-user games, and I hope you do, too.

PvE games are those that emphasize solving puzzles, completing quests, and killing non-player characters (NPCs) in order to gain experience, levels, and loot.

If this sounds familiar from your WoW days, it’s because many modern MMORPG ideas came from multiplayer text RPGs. 🙂

In general, PvE games feature things like classes, levels, skills, spells, and the ability to revive after dying. They may also feature clans, achievements, titles, and numerous channels for communicating with one’s fellow players from anywhere in the game.

PvP games are those that emphasize player vs. player combat or player-killing (PKing). In addition to levels and classes, these games will often feature things like clans or factions, achievements, leaderboards, kill counts, and PK announcements.

Players primarily play PvP games for the thrill of competing and winning against other players. Combat is often faction-based, with players going to war for their particular faction.

Can PvE games include PvP?

Absolutely! Many modern hack and slash games include PvP mechanics that allow players to pit themselves against each other for fun and glory.

PvP systems can be implemented in numerous ways. For example, PvP combat might be restricted to certain zones, such as arenas, or to certain days of the week. PvP might also require opting-in or may only be initiated with special commands.

Roleplaying (RP) games are those that emphasize an immersive storytelling environment. They typically require that players stay in character in order to maintain roleplay immersion.

Among roleplay-heavy games, there’s generally an expectation that players will use emotes (also sometimes called poses). Emotes are a freeform way of writing out your character’s actions rather than executing them one at a time with single commands (socials).

Because it takes time to write out these custom actions, interactions between players can take longer and may feel slower-paced than with the PvE and PvP MUD styles.

In addition to having higher expectations around writing and roleplaying, RP games may de-emphasize game systems such as levels, classes, achievements, and leaderboards. They might also have rules in place to enforce the separation of IC and OOC knowledge and discourage metagaming.

Social games are those that emphasize socializing and making friends. Combat and other systems may be de-emphasized or not present at all. Roleplaying may be encouraged in certain areas and unnecessary in others.

Even more pared down are talkers, which are essentially chatrooms hosted on private servers. Talkers were popular in the ’90s, but integrations with IRC (and more recently Discord) have enabled players to chat across games – or even with people who aren’t playing a game at all.

Additionally, most MUDs tend to have multiple channels of their own that allow players to chat with each other while playing. Thus, many modern games include “talker” elements without being dedicated talkers, themselves.

Last but not least, graphical games are those that offer an enhanced experience through a graphical user interface (GUI).

Graphics can include maps and clickable elements (such as buttons for moving N, S, E, and W), as well as artwork of areas, equipment, or foes. There might even be images for items being held or wielded, for example.

For most games with a graphical component, the GUI is an optional layer available through a specific MUD client or downloadable configuration.

Which MUD style is right for you?

As you’ve probably guessed by now, most modern games are designed to appeal to more than one type of player. Thus, MUDs will often include a variety of systems meant to fulfill different needs.

RP games can include both PvE and PvP combat, for example. Most games, regardless of type, include various channels for socializing. Many popular hack-and-slash games provide some form of graphical user interface, which can include ready-made maps, buttons, and health gauges.

The sometimes challenging part of MUDing is figuring out which MUD style(s) suits you best, then locating a game that ticks most or all of the right boxes.

How to determine your preferred MUD style

If you’ve never played multiplayer games before, one of the best ways to figure out what MUD style will work best for you is to simply give some MUDs a try.

Grapevine is a great way to get started because you can try a popular game (or even a game at random) without having to download a MUD client. You might also try joining a MUD of the Month event, in which players try out a new game each month.

Games will typically identify themselves as hack and slash, roleplaying, PvP-oriented, and so on in their descriptions. You can also search for games with these tags on listing sites like MUD Scry.

If you’re still not sure where to start, a good old-fashioned hack and slash game is probably going to be your best introduction to the MUD genre. Especially one that’s well-populated and has a lot of friendly players willing to show you the ropes or lend you a hand if you get stuck.

For example, Aardwolf is a long-running game that ticks the PvE, PvP, social, and graphical boxes, but it’s not an RP-focused game. The benefit to this is that you can explore, ask questions, and learn from other players without being told to “find out in character.”

Most MUDs will let you know early on if they offer accessibility options, such as a screen reader-friendly mode. They’ll typically advertise their accessibility features in their game listing, on their homepage, and right when you enter the game to create your first character.

Screen reader-friendly games tend to limit the presence of decorative ASCII, replace color codes with meaningful labels, and reduce the number of lines that need to be read by the screen reader so that the player won’t be spammed.

For example, Alter Aeon is a popular fantasy MUD among blind players. It also comes recommended by one of my interviewees, Aaron, a partially-sighted gamer.

If, after trying out various games, you have trouble finding one that quite fits the bill, you can always browse or ask around on r/MUD. (If you decide to ask for help, be sure to use the Which MUD? flair.) You’re likely to receive at least a few good recommendations if you take the time to post.

As you explore, keep in mind that most MUDs are hobbyist projects run by volunteers. Wherever you go, remember to be polite and follow Bill & Ted wisdom (be excellent to each other).

So we’ve looked at MUD styles, but what about player types? If you enjoy personality tests and quizzes, you might find the Bartle test to be a fun and illuminating exercise.

Back in the ’90s, Richard Bartle argued that players tend to fall into one or more categories, which he labeled as achievers, explorers, socialisers, and killers.

In Hearts, Clubs, Diamonds, Spades: Players Who Suit MUDs, Bartle wrote, “An easy way to remember these is to consider suits in a conventional pack of cards: achievers are Diamonds (they’re always seeking treasure); explorers are Spades (they dig around for information); socialisers are Hearts (they empathise with other players); killers are Clubs (they hit people with them).”

Importantly, Bartle noted that “players will often drift between all four [types], depending on their mood or current playing style.” However, he added that most players do have a main style toward which they gravitate.

By understanding what motivates different types of players, game admins and developers can design their games accordingly.

Which type are you, Andruid?

Many years ago, when I initially took the Bartle test, I scored as an Explorer-Killer. At the time, I primarily played roleplay-heavy games and tended to channel my energy into politically strategic or mischievous characters backed up by serious combat stats.

But people and playstyles can and do change.

Most recently, I scored as a Socializer-Explorer, which is probably pretty accurate for where I’m at right now. These days, I tend to focus more on storytelling (tabletop style, except in text) and bringing players together for fun in-character events.

If you happen to take the test and Tweet your results, feel free to @ mention me (@the_andruid) – I’d love to know what your gamer type is and whether you think it hits the mark!

How to market your text-based game