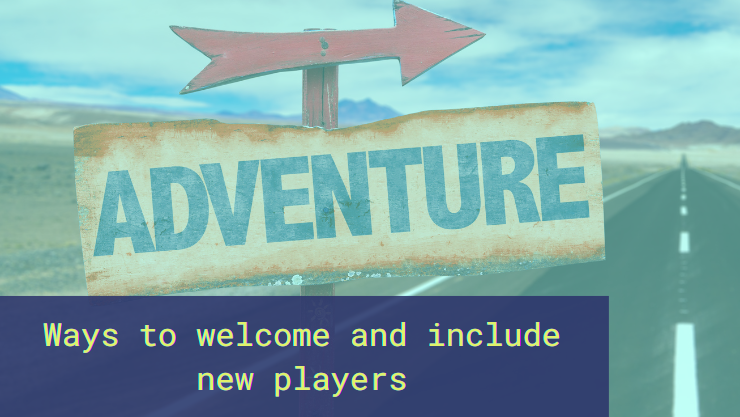 The “too many games, not enough players” problem

“There just aren’t enough players” is a complaint I hear regularly within the multi-user dungeon (MUD) community. I also hear, “New players just don’t stick around.”

Most often, I hear these types of complaints from the players of roleplaying MUDs. RP games in particular seem to suffer from small or highly fluctuant playerbases, which can be a serious detriment to ongoing storylines or the ability for off-peak players to find roleplay.

While there are many reasons for this (a contentious topic worthy of its own post), one thing seems clear to me:

For example, there are probably things your game could be doing better to welcome and include new players, right?

Players are part of the solution

In fact, both players and staff can have a huge impact on the experiences and perceptions of new players. And not just on how new players view THAT game. As I argue in my post on toxic gaming communities, a player’s experiences in one game can affect how they view the entire genre.

In a way, that makes us all ambassadors for the hobby.

I don’t say these things to pile on the responsibility or suck the fun out of gaming. Not at all.

Rather, I’d like to help players move beyond simply complaining about a thorny problem (“new players don’t stick around”) to becoming part of a solution.

To that end, I’ve invited Petal, a fellow roleplayer and MUD enthusiast, to share some of her tips in today’s post.

While Petal’s advice is tailored toward established players (AKA “oldbies“) in roleplaying MUDs, much of it also applies to staff or staff alts. Several of her tips also work equally well for roleplay-optional games.

If you’re a game staffer or implementor, I hope you’ll read the tips below and consider ways to empower and encourage your playerbase to do at least some of the things Petal suggests.

11 tips for oldbies on RP MUDs

There are many very real struggles for new players as they become acclimated to a new RP MUD, with plenty of new systems to learn, lore, culture, and rules. But attracting and retaining players is particularly important for both new and old MUDs alike as they help keep the community fresh and growing.

New characters tend to have their foot half out the door in the first few months of play, and all too often the struggles become too much and they eventually dip out of the game.

In the worst cases, this may result in unfavorable reviews of the game on public venues such as r/MUD, or their negative experiences being shared with their friends.

First impressions matter, and there’s a lot that established players can do to help make new players’ experiences memorable, in a positive way.

Below are 11 things you can do to help newbies feel welcome and included in your game and community:

1. Welcome new players when they join the game

If your game announces when new accounts or characters are created, use the newbie channel to welcome them to the game.

While this may seem like an easy task, it can have a substantial positive effect on incoming players all the same.

Welcoming new players can take the form of: Welcome to (name of MUD) (player name)! You can ask questions here by typing (command).

2. Make yourself available for public RP with new players

Every now and then, particularly when newbies are logged in, try to make a point of heading out into public to the frequently ventured locations.

If your game has a system for showing active social spots, make sure you toggle it on so that other players know to go to your location for RP. Use any other methods that your MUD has to signal that you are available for roleplay.

Using these systems gives new characters an important chance to meet and greet and get to see the faces of more veteran characters. It also provides you with the chance to start throwing out roleplaying hooks and learn more about the incoming characters.

This tip is a particularly important one. Talking to many newbies over the years, this is the one thing that really stands out as being a top cause for people not establishing themselves on a new RP MUD: they feel unseen and struggle to get involved in scenes.

Sometimes, new players don’t feel familiar enough with the world to be as proactive as more established characters. Or they might be anxious about interacting with a prominent character.

This is why it is good to acknowledge newbies in scenes, whether it is with a glance, a nod, a side-eye, a greeting, or a glare. Just something, anything, to include new players.

As a newbie, there is nothing worse than going into scene after scene and trying to get involved and feeling invisible.

After engaging in a scene with a newbie, consider praising something they did well.

Playing a new RP game can be scary – engaging with established players all the more so. A bit of positive reinforcement can go a long way toward encouraging a newbie that they’re getting there.

Many roleplay MUDs have a system for recognising great RP, but also osay, tells, notes, or forums can be another way to provide positive reinforcement after a scene.

Do your best to answer questions on your MUD’s newbie communication channels and avoid giving the meme response of “Find out IC.”

For example, if a newbie asks for the scavenging location of a rare or closely-guarded resource, rather than telling them “Find out IC” you can instead say things like:

Aim to be helpful. Newbies will feel more welcome and included if you don’t immediately shut them down.

If you don’t know or have an answer to their question, simply saying, “I’m afraid I don’t know, but you can try asking on Discord or the forums” (or whatever other ways the MUD has for communicating questions) is far better than letting the new player think that their question is being ignored.

When players have questions or seem uncertain, point them toward the relevant helpfiles.

This can be a great way to direct them to the information they are requesting as well as further details on the topic. It also lets them know what helpfile they need to reference in the future.

7. Give new players a chance to course correct

If a new player appears to be getting tripped up due to a misunderstanding about the game’s lore, consider reaching out to them out of character (OOC) before punishing them in character (IC).

Roleplay MUDs tend to have steep learning curves, and it can take weeks, if not months, to get a good solid understanding of all the lore and mechanics.

The new player might not have yet found the right helpfiles about the situation in question.

If a newbie is in an escalating situation with you, consider offering a friendly OOC heads-up and give them a chance to course correct. Especially if it is over something the character should know but the player does not.

The new player doesn’t have to course correct if they don’t want to (some players enjoy learning new games via “trial by fire”), but you will have at least given the player the option.

When you do get a chance to interact with new characters, consider throwing them a hook or two.

For example, hire them to find some resources or to make something for you. You could also ask them to find someone for you, write a song, send them a letter, mention them in a rumour – anything, really.

These things really matter for helping a player feel included and can be what keeps them coming back for more.

Got a plot going on that you need to be present for? Roleplaying with a new character and something important comes up?

Consider finding a reason to drag them along rather than exclude them.

Sure, introducing a character you don’t know might be a risk, but that’s sometimes the best bit about it! You have the potential to cultivate a new ally or even an enemy! Both wonderful things to have, as conflict is what drives character arcs and stories.

10. Check in with new players about their experiences

Check in with new players and be inclusive in OOC chat, Discord, and any other OOC communication methods your MUD might support.

Be understanding and patient when new players post on the forums. Remember that you were once a newbie, too.

And above all, reflect the warm community that you want the game to be known for, even if you might disagree with them!

Lastly, post useful tips and advice on how to navigate the game’s lore, theme, or trickier commands. New players can likely benefit immensely from your advice.

So consider sharing your top tips through posts on the forums, Discord chats, OOC, etc., to make it easier for new players to learn the ropes.

Most important of all, recognize that newbies are great! They represent the opportunity for fresh stories, new characters, new perspectives, and are a great way to keep the community revitalized. They are your new potential IC enemies, lovers, storytellers, plotters, event holders, and content creators. Embrace this!

Petal is a neurodiverse roleplay MUD enthusiast who started developing MUDs on a dare nearly two decades ago. She has coded on three RP MUDs over the years (Shadow Siege, Dark Isles, and Carrier) but now spends her time primarily as a player, working to help build friendly and supportive MUD communities. She is currently dabbling on The Inquisition: Legacy and eagerly awaiting the opening of the new zombie apocalypse roleplaying MUD, The Free Zone.

Thank you so much to Petal for sharing her tips and advice on how to welcome and include new players! For suggestions on gathering feedback from players (and what to do with it after), take a look at How to market your text-based game. If you’re a staffer or dev, the post on MUD help systems also has some great suggestions on how to shore up a game’s tutorial and helpfiles to make newbie onboarding easier.