What is a multi-user dungeon (MUD)? 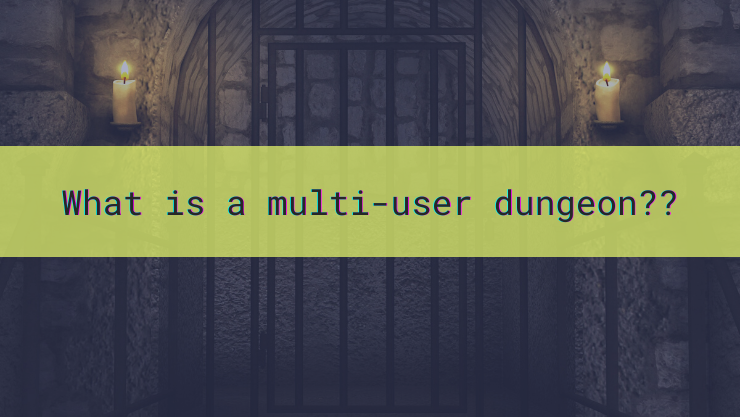 Just what is a MUD, anyway? And what does that mean, multi-user dungeon? Are all of them set in dungeons? Speaking of dungeons, is there something kinky about the MUD community?

Well, maybe! But that’s not what today’s post is about. Below, I’ll walk you through the definition of the term MUD and explain what is meant by “multi-user dungeon.” I’ll also teach you how to find free games to play – if you’re up for it.

What is a MUD?

A MUD is a type of text-based roleplaying game that is played by multiple users at the same time.

Among the MUD community, it’s generally accepted that the acronym MUD stands for “multi-user dungeon.” The “D” can also mean “domain” or “dimension.”

If you’ve ever played an online RPG, you’ll notice that MUDs use many of the same concepts and slang words. You can think of them like chatrooms with special commands you enter to get things done. Instead of clicking on a goblin to attack it, you might type something like ‘attack goblin’ or ‘kill goblin’ instead.

Typically, characters have score sheets with their stats, skills, and other qualities listed (see these screen reader-friendly examples), and characters move around from room to room fighting monsters and making friends. It’s all just done with text instead of graphics. In fact, MUDs were the precursors to modern MMORPGs!

Most MUDs are free to play and are maintained by volunteers who put in the time and effort because it’s fun for them.

Do all MUDs have dungeons?

Definitely not! MUDs encompass a wide variety of settings, which is why “domain” or “dimension” might seem more appropriate.

So why the word “dungeon,” you might ask? Well, according to ye olde lore, the acronym came from an early text-based adventure game, MUD1, which was created by Roy Trubshaw and Richard Bartle in the late ’70s. Both Trubshaw and Bartle are said to have enjoyed a version of the interactive fiction game known as Dungeon (Zork).

In the years that followed, other trailblazers created MOOs, MUSHes, and MUCKs using different approaches. What these games all had or have in common is that they host multiple users online at the same time.

Collectively, they’re often referred to as MU* games, with a wildcard. Individual games may also self-identify as MU* or MUX (multi-user experience) if they don’t fit neatly into one of the other categories.

(If you’re interested in deep-diving into the history and particulars, check out the additional resources at the end of this post!)

How do MUD games differ?

In my opinion, there are 3 major ways that today’s games differ from each other:

I’ll explain each of these below.

The term “codebase” refers to the code that makes up game’s underlying program. The program runs on a computer somewhere, and players use a client to connect and log in. Codebases are written in a variety of programming languages. For example, CoffeeMUD is written in Java, whereas TinyMUD is written in C.

Different stock codebases offer different capabilities, including default commands, systems, and maps. These systems dictate how combat works or how players communicate with each other. Many long-running games today are so heavily-modified that their code barely resembles the initial codebases they were created from!

A game’s codebase is usually credited on log-in, right after you connect to it but before you enter your username. Here’s an example from a game I have handy in my client (note the DikuMUD, ROM, and Merc credits):

Some codebases are geared more toward hack and slash-style gaming, meaning they focus more on killing monsters to level up and gain sweet loot. Other codebases are designed for socializing or roleplaying. (For an overview, see my post on MUD styles.)

Ultimately, you don’t need to know about a game’s codebase before you play, and most games are built on heavily modified code, but if you find that two games seem really similar, it’s probably because they share some common ancestry!

To sum it up simply: a codebase provides structure. It provides the environment and commands that allow players to interact with each other and the virtual world inside the game.

Another way games differ is by genre or fandom. There are many options out there, from fantasy to cyberpunk, Harry Potter to Star Wars. Naturally, the genre of the game has a big impact on the types of NPCs and zones you’ll encounter, as well as things like spells and abilities.

A zone is a mapped-out area usually dedicated to a particular city, region, theme, or set of puzzles and quests. Similar to a zone in World of Warcraft and other MMORPGs.

Last but not least, games differ by their culture and the communities that surround them. Two games can share the same codebase and genre but have completely different expectations about how players will interact with each other.

For example, some games are roleplay-enforced, which means players aren’t allowed to talk about out-of-character things using in-character speech and channels. Other games are much more relaxed and don’t care if someone talks about Saturday night’s sports game in the faction chat.

Culture also includes a game’s policies. For example, how staff handles disputes or whether they allow adult themes. Games typically include their rules early in the character creation process and will require you to read and abide by the policies in order to play.

Almost all games these days have a list of topics they prohibit players from writing about during roleplay, such as rape or sexual harassment. This is generally true for other types of writing games, as well.

Where can I find a free game to play?

I haven’t scared you away, yet? Good! In my experience, most games are staffed by friendly volunteers and hobbyists – ordinary people with day jobs and/or families.

If you’re open to the idea of text-based roleplay, there’s a pretty good chance you’ll find a game you like, supported by a community of decent human beings.

To find a game to try, you can start by browsing a MUD directory. There are several to choose from. At the top of my list is Grapevine. Unlike some of the classic directories, it doesn’t include a voting/review system or advertisements. It presents games in a nice clean format, has a working search feature, and shows you whether a game is currently online (available) or offline (unavailable).

Aside from Grapevine, there’s also MUDListings, which includes reviews, available staffing opportunities, and links to Discord and Reddit.

Other directories are listed on my MUD Resources page. Just be aware that some listings haven’t been updated to use SSL (they have http:// in the URL instead of https://), so your browser may yell at you about them being not safe or not secure. Use them at your own risk.

Okay, I found one! How do I connect?

Hooray! If you’re using Grapevine to look for a game, you’re in luck: it has a built-in client. Just click on the Play button, and you’re good to go!

If you’re feeling adventurous, you can also try the Surprise Me & Play! button. It’s located just under the filter options. I pressed the button and was taken to… Iberia! Iberia gets some free advertising. 😂 Actually, if you have time, it’s worth swinging by Iberia’s website, as they do list some pretty good MUD resources, too.

If you’re using a different directory to look for a game, it may or may not have a functioning browser-based client. Some do, some don’t. Some games even have their own custom-built web clients!

You may just need to poke around and explore a bit until you find something that strikes your fancy.

If you decide to try a roleplaying MUD, you may find my Beginner’s guide to roleplaying helpful.

When you’re ready to level up, you’ll probably want to try out a full-blown MUD client that you download to your computer. A client isn’t required, but using one does offer a few advantages. For example, it will allow you to customize the game window and set up shortcuts that will make connecting and playing easier.

Two of the most popular free clients are Mudlet and MUSHclient.

Personally, I use Mudlet on a Linux machine. It’s lightweight and superfast, but unfortunately, it’s not very screen reader-friendly right now. (Though that’s being worked on according to this recent post.)

Mudlet can be a little intimidating if you’ve never done things like coding, scripting, or setting up macros. Also, the stock mapper isn’t quite as intuitive. If you enjoy writing your own scripts and building your own little databases of things, though, you’ll probably love it.

I also use TinTin++ sometimes when I’m out and about or want something lightweight and old-school.

Is there an app for that?

There sure is. I could probably write a whole blog post on desktop MUD clients and smartphone apps, and maybe I will. But for now, I’ll leave you with a tip: search your phone’s app store for “mud client.” Read the reviews, look at the features they offer, and try one out.

You can also check out my MUD Resources page for a couple of suggestions.

If you’re interested in deep-diving into the history and evolution of MUDs, you’ll find some great reading material here:

These pages were compiled by people who were making and studying MUDs while I was still wearing braces and figuring out what I wanted to do when I grew up. Definitely worth a read if you enjoy exploring rabbit holes full of trivia and history (I do).

If you’re looking for a community where you can ask questions and find more resources, check out r/MUD on Reddit.

BONUS: If you want a blast from the past that goes even further back, try playing a version of Zork!