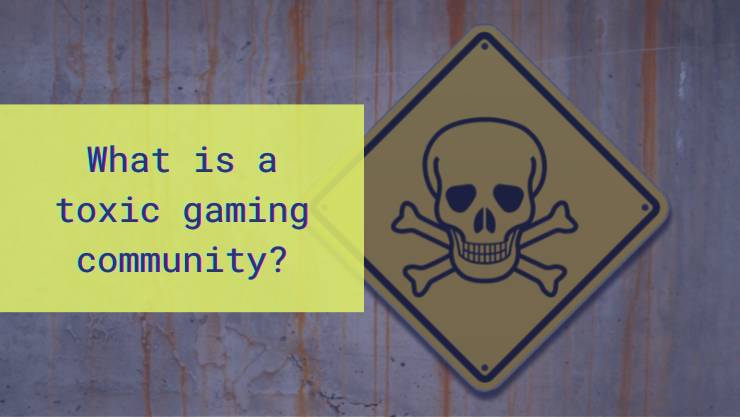 Although the term “toxic gaming community” is most often used in the context of competitive video games, there’s no denying that the tabletop and text-based gaming communities have experienced their share of toxicity, as well.

In today’s post, I describe what makes a community or gamer toxic. I then describe 10 behaviors that can contribute to a toxic community. Finally, I wrap up with some personal advice on dealing with toxic behavior.

Why toxicity in gaming matters

It should go without saying, but this stuff matters for a few important reasons:

If the dwindling text-based gaming community in particular wants to attract and retain players, it not only has to work against the perception that our games are obsolete and old-fashioned – it also needs to make sure that the games we play and create are safe for other human beings, regardless of their age, gender, race/ethnicity, sexual orientation, religion, or ability.

Let’s take a look at what constitutes a toxic gaming community.

In these communities, unsporting behavior such as griefing, cheating, and metagaming may also be common.

Note: while not everyone who plays games self-identifies as a gamer, I use the terms “gamer” and “player” interchangeably throughout this article, as the two groups are not mutually exclusive and can be found in the same communities.

How do you know if you’re in a toxic gaming community?

You may be a part of a toxic gaming community if you experience being harassed or discriminated against because of your actual or perceived age, gender, sexuality, race/ethnicity, religion, or ability – or if you witness these things happening to another player.

You may also notice behavior such as griefing, cheating, and metagaming, as these often go unchecked in toxic communities.

Another red flag: you or your fellow players privately talk about how you prefer to “keep your heads down” to avoid unwanted attention. This is typically a sign that you don’t feel comfortable expressing yourselves in that community.

What is a toxic gamer?

A toxic gamer is someone who engages in harmful social behavior, such as discrimination, harassment, or abuse aimed at other players. They will often rationalize their behavior as normal and shift the blame onto their victims, using the anonymity of the internet or an unequal power structure in order to shield themselves against the consequences.

Toxic gamers lift themselves up by bringing others down. When they go about it intentionally, they’re also known as “trolls.”

Trolling occurs when someone engages in toxic behavior with the specific intent of causing distress or harm to others. Thus, while all trolls are toxic, not all toxic gamers are trolls.

While it’s true that toxic gamers can have a nasty attitude, especially when things aren’t going their way, not all of them are hot-headed and impulsive (and therefore easier to identify).

Also referred to as bad faith actors, they may seem outwardly friendly and reasonable in public channels but turn out to be manipulative or predatory in private. The more they learn about their victims, the more they can exploit them.

For example, these types of toxic players may attempt to gaslight other players who have less power or low self-esteem in order to get their way.

This becomes especially problematic when the conversations occur outside the game (e.g. in Discord) where admins have no way of knowing about it in order to put a stop to it.

How are toxic communities created?

Toxic communities are usually the result of behavior from both game implementors and players: staff may themselves exhibit (and therefore lead with the example of) toxic behavior, or they may be too removed from the game to keep toxic players in check.

Whether toxic behavior is perpetuated by staff or allowed to persist out of neglect (or both), it’s not great for the game or the well-being of its players.

The point here isn’t to place blame, however – it’s to explain what kind of behaviors and activities contribute to a toxic atmosphere so that both staff and players can take steps to protect their games and communities from the effects of toxicity.

Below are some of the things staff and players do that contribute to a toxic gaming community. Essentially, it’s a handbook of things you should not do if you want to create a safer, healthier space for players.

It’s also your checklist of things to watch out for in any game you play, create, or support.

As a staffer / admin

Here are 10 ways players ruin the game for everyone else:

Nearly all of the behaviors listed here should be explicitly forbidden in your game’s rules, and these rules should be consistently enforced by staff.

What I’ve laid out here is just a start. Think about other behaviors you’ve seen in your favorite games that can and do contribute to a culture of toxicity.

Why you should address toxic behavior

In the real world, toxic communities generally don’t happen overnight. They happen because toxic behavior is permitted and tolerated until it becomes the expected norm. For that reason, it’s important for players to recognize and stand up to toxic behavior.

To borrow a phrase from DHS: if you see something, say something.

Granted, it’s often easier said than done. By the time you realize you or your friends are in a toxic situation, you may have already given in to an emotional outburst and said something you regret. Or you may have told the toxic player something personal that you’d rather not have out in the open. You might also worry about getting in trouble, being the target of revenge, or flat-out being ignored.

For these and other reasons, I highly recommend that you keep logs of your conversations, and always remember that others can do the same.

Tips for standing up to toxic behavior

Here are some tips for handling a toxic situation as a player:

Other things you can do include boycotting games with a reputation for being toxic and leaving honest reviews so that other players can make informed decisions about whether or not to play.

What about bad faith actors?

I mentioned earlier that bad faith actors are often more difficult to identify. Here are some tips to help prevent harm from this type of toxic player:

When to say goodbye to a toxic game

When a game is more frustrating than it is fun, it’s time to say goodbye.

You might think that the toxic staff or players are the problem and not the game itself. After all, the game was once fun for you, and it could be fun again under the right conditions.

However, the reality with any multiplayer game is that the game, its staff, and its players are a package deal. If your best efforts to address the toxicity don’t result in positive change, it’s not your fault. But it is time to take your business elsewhere.

Imagine going to a restaurant and getting berated by the other guests – or worse, the server or on-duty manager!

Not only would you probably never go back there again, but you’d also likely tell all your friends about how terrible the experience was and warn them away from eating at that restaurant – maybe even that entire restaurant chain. Right?

And yet… I’ve seen players tolerate repeated abuse because it used to be their favorite restaurant, or they’ve invested a lot of time and energy into the place, or because the meals are free and all their friends still eat there.

Take my advice: it’s not worth it.

If you’re in a bad relationship with a toxic game, it’s time to cut ties and move on. Find a community that deserves, respects, and appreciates you, because no game is worth the price of your well-being.

The 5 basic MUD styles and you