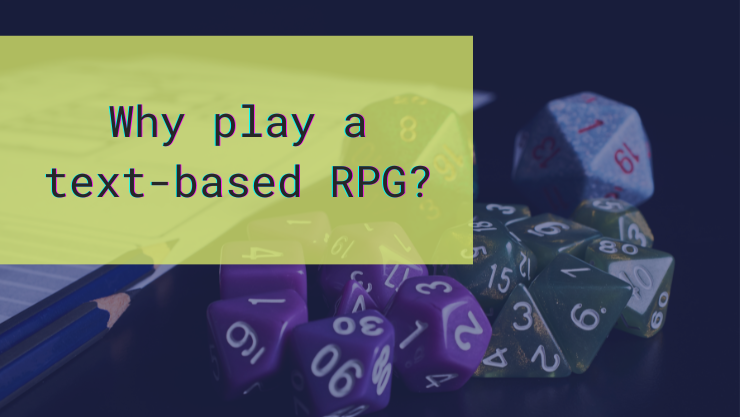 There’s a whole world of fantastic video games out there, so why play a boring old text-based RPG? In particular, why play a game that involves interactive storytelling?

I’ve got 7 great reasons for you in today’s post. Before we jump in, though, it may be worth defining what is meant by a text-based RPG, especially in this context.

What is a text-based RPG?

A text-based RPG is any roleplaying game that is played primarily by reading and writing. Text-based games can include some images, whether in the form of faceclaims, concept art, memes, and simple UI elements, but for the most part, they’re about taking part in a story using written words.

Unlike video games, text-based RPGs are more likely to be screen reader friendly. Thus, they offer a world of possibility as limitless as the imagination, whether a player has ordinary sight, partial sight, or no sight.

Fortunately, many platforms have begun encouraging the use of alt text, so even if the game does include the use of images, it’s still possible for non-sighted and partially-sighted players to participate.

Reasons to play a text-based RPG

Below are 7 great reasons to play a text-based RPG. These reasons are applicable to any type of writing game that involves roleplaying, especially with others.

Text-based RPGs are all about getting creative. This is true even if the game centers on a fandom and includes playing canon characters.

Raise your hand if you’ve ever spent hours creating a new character in a roleplaying game. I know I have, and not just when it comes to writing. I’m one of those people who will spend at least an hour trying out all the faces, outfits, and hairstyles in video game character generators, too.

Character creation is one of the very first steps to joining any online roleplaying game, and that’s true for text-based RPGs, as well. What will your character look like? Sound like? What about their background? Their manner of dress, or their mannerisms? What are they good at? Do they have any character flaws?

There are so many things to think about, so many routes you can take. It’s your first opportunity to get creative before the roleplaying begins, but it certainly won’t be the last.

Once you’ve flexed your creativity muscles on a new character, it’s time to jump in and roleplay. Text-based RPGs are a great outlet for improving your writing and storytelling skills.

This is true even if your chosen RPG is a Twitter game! (It’s been argued that Twitter actually makes you a better writer.)

One of the cool things about multiplayer text-based games is that they’re interactive and social. If you enjoy long-form writing but find that it gets lonely after a while, give text-based gaming a try. You might find it an engaging and refreshing way to hone your writing skills.

3. Learn to improvise and empathize

Because multiplayer RPGs are social, they create situations that are unexpected and off-the-cuff. The more you roleplay, the more you’ll learn to improvise in your writing.

You’ll find that after a while, you can write faster and that your character’s activities and reactions will come more naturally to you.

I found this to be especially true when I started roleplaying outside my own demographic profile. It was not only a useful exercise in learning to think and write from other perspectives, but it also made me more empathetic toward people different from myself.

Another great reason to play text-based games is the opportunity to experiment. With each new character, each new game, you can try out a new fandom or even mix-and-match concepts.

Fandom crossover isn’t something you can typically do in a video game, but it’s quite popular among text-based games. There’s also a much wider variety of fandoms among text games because all you need is your imagination and some friends to immerse yourselves in your favorite fictional world.

Discovering something new is one of my personal favorites on this list. As with long-form writing, text-based RPGs are a wonderful excuse to research and learn something new on the daily.

For example, a few weeks ago, I was writing about vertical takeoff and landing vehicles (VTOLs) for a futuristic sci-fi game, and the next thing I knew, I was researching vortex ring state.

Every time you describe something new, it’s an opportunity to do a Google search and learn a detail you didn’t know before. Animals, plants, machines, fashion, cuisine, materials, techniques – I’ve learned a ton over the years simply because I was motivated to do a bit of research for whatever text-based game I was writing for at the time.

6. Become part of an online community

Every text-based RPG I’ve ever been a part of has been surrounded by an online community of fellow gamers. In my experience, most of these communities are quite warm and welcoming and love to meet new like-minds!

These days, communities tend to gather on Discord servers or connect over social media. When you start playing a game, your fellow players won’t be hard to find. If the game has a Discord server, for example, the invite link will likely be posted in a prominent spot on the game’s website or as part of a MOTD.

Before long, you’ll be making new friends who share your interests.

(Tip: Toxic communities do exist. It’s worth taking a few minutes to browse a game’s forums or reviews before you invest a lot of time and energy into it, just to make sure it’s right for you. See additional suggestions below.)

7. Have fun and enjoy yourself

You can play them from anywhere, and they have minimal PC requirements (PC as in “personal computer” this time, not “player character”). And they focus on interactive storytelling and adventuring in ways that make the most of human imagination.

Text-based RPGs aren’t everyone’s cup of tea, of course, but if you love fiction and enjoy writing and roleplaying, chances are pretty good you’ll have fun playing a game that combines the two.

What to watch out for when playing a text-based RPG

Now that we’ve covered some pros, I want to take a moment to discuss a few cons. Don’t worry – there’s nothing here that should hold you back. These are just a few things to watch out for during your adventures.

For one thing, no type of online multiplayer game is without its downsides, and that’s true for text-based games as well.

Because multiplayer games are social games, there will always be a bad egg in the bunch or someone who rubs you the wrong way. If you stick around long enough, you’ll probably encounter unpleasant drama, trolling, twinking, metagaming, interpersonal conflict, miscommunication, or intolerance at some point during your gaming career. (See the glossary for these and related terms.)

It’s part and parcel of playing multiplayer games, but that doesn’t mean you should tolerate it, either.

Indeed, part of the challenge of finding a fun game is making sure the community that surrounds it is also a good fit for you.

Text-based RPGs were the precursor to MMORPGs; they’ve been around for decades. But it’s important to remember that gaming atmospheres and communities can also shift over time depending on who’s actively staffing and playing.

When to move on and explore something new

Life is too short to waste on anything toxic. If you notice a game has stopped being fun, or if you feel like you spend more time arguing than enjoying yourself, take a break and find a new game to play.

Many gamers find this difficult to do after they’ve sunk a lot of hours into a character, especially one to which they’ve become attached. Truly, I can’t tell you how many times I’ve watched players stick around long after they’ve stopped enjoying themselves, and I’ve even fallen into this trap a few times, myself.

I’ll tell you now: it’s not worth it.

No matter how many hours you’ve invested in a game, it’s not worth the price of your current well-being. Take care of yourself, and encourage your friends to do the same.

There are so many excellent games out there that if you take the time to look, you’re sure to find something exciting and new!

How to find a game

So you’ve decided to try something new – what’s next? The good news is that text-based RPGs aren’t that difficult to find. Are you more interested in trying a fast-paced game that you play in real-time, or would you prefer a slower game that you can play a few times a week?

There are a ton of options out there depending on what strikes your fancy.

If you haven’t already, I recommend browsing this post on types of writing games. At the end of each section, I’ve included some examples and game directories to help you get started. Good luck!

How to be a better game master: 10 tips